Near the middle of Toliara sits the Notre Dame de Nazareth School. From the outside it looks like many of the private schools in Toliara. High walls surround the yards and two storey cement school buildings. Vendors wait at stalls full of sweets and snacks outside the imposing iron gates as children in blue uniforms walk in and out in groups. But inside there is a lush little green oasis of nature with lots of ecologically sound ideas bubbling up, thanks to Eco-schools. 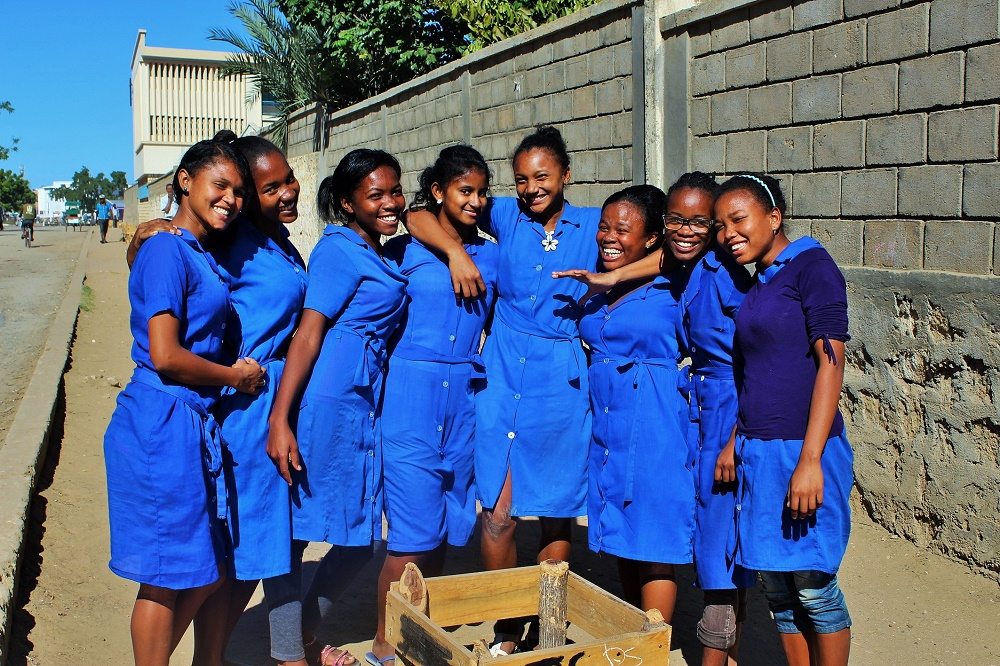 Eco-schools is a global initiative that encourages socially responsible learning in primary and secondary schools.  The initiative began in 1992 and projects are now established in 49,000 schools in 62 countries. 15 million students worldwide are involved in Eco-schools and learning about a sustainable future (www.ecoschools.global). Notre Dame de Nazareth School joined Eco-schools in 2015 and set up Club Vintsy to run its Eco-schools projects and curriculum. The club, named after a local species of bird, is made up of girls and boys aged between 10 and 16 years old.  We got to visit Notre Dame de Nazareth on Saturday 4th June along with NGO Honko and some of their Juniors when we were invited by Club Vinsty to hear about these ideas and see some of their projects. 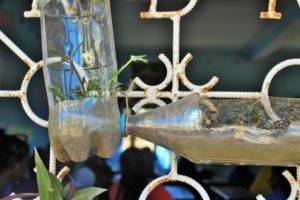 e first thing that strikes you when you walk through the gates of Notre Dame de Nazareth School is the plants. They’re planted in pots in rows outside the canteen, planted in beds outside almost every building and planted in plastic bottles cut, linked and attached to the bars of classroom windows. Much of the planting has been done by Club Vintsy.  The second thing you notice is the enthusiasm all the club members have for the Eco-schools projects.  Throughout the morning everyone spoke confidently about their projects. You could hear the enthusiasm in their voices and see how proud they were to show us their work. Every club member was engaged and also spoke knowledgeably about Malagasy culture and environmental and sanitation issues.  They really knew their stuff and were very eager to show us what they’ve done. 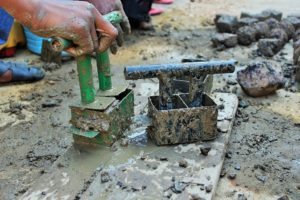 Firstly, the club showed us how they make briquettes for fuel.  Two of the older girls explained the process to the group in Malagasy and excellent English, and dealt expertly with questions from the group while they mixed the ingredients.   The briquettes, made from a small amount of charcoal, water, clay, sawdust and zebu manure, provide an alternative to burning traditional charcoal, which is the only fuel source available to the majority of people in Madagascar for cooking. The production of charcoal for cooking fires has contributed significantly to deforestation throughout the country. The briquettes made by the young people at Club Vintsy contain approximately a quarter of the usual amount of charcoal needed and can be shaped in a press or by hand.  They are a simple and practical step in addressing charcoal use throughout the country, as the other ingredients required are freely available or are inexpensive to buy. 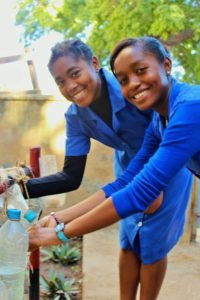 The charcoal briquettes are easy to make and everyone had a chance to have a go.  After the demonstration, the briquettes were left in the sun to dry while the members of Club Vintsy took us to their ‘tip taps’ to wash our hands.  Tip taps are made from reused water bottles with a hole in the lid and tied to a frame with a piece of rope wound around a nail. To ‘turn on the tap’ you just tip the bottle. A small amount of water comes from the hole in the lid. Tip taps provide an inexpensive, water saving solution to hand sanitation that can be used in schools or homes. There was also a soap dish, made from a water bottle cut in half, attached to the frame. ‘Do you think eco-school is good?’ Science and Education Officer Apolline Mercier asked club member, Estella, as they washed their hands. ‘Yes,’ Estella smiled. ‘Why?” Apo asked. “It makes life better’ she replied.

Once everyone’s hands were clean it was time to get them dirty again in the school’s tree nursery. Some of the 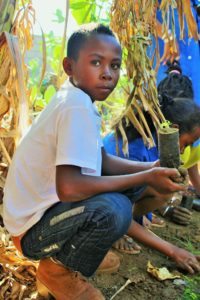 younger club members demonstrated and explained how to fill small plastic bags with soil and plant saplings that they had grown on site. We asked what they do with the saplings and some of the older girls took us outside to have a look at the planting on the pavements surrounding the school. The club has planted saplings in protective frames along the entire block surrounding the school. They are really going to brighten up the street, and provide a filter for air pollutants when they have grown. On the way back we dropped into a classroom where a class of 10–11 year olds beamed as they showed us their Eco-schools award. Back at the tree nursery, the club had lovely gifts of Moringa saplings for us to take home.

The group then made its way to the school’s vegetable garden where we saw the tip taps being used to water the plants and were shown what vegetables were growing. On the way we also got to see waste collection points made from cooking oil containers that have been cut, with a separate bottle for compostable waste beside it. The compost is used as fertilizer for the vegetables that the club sells to the mar 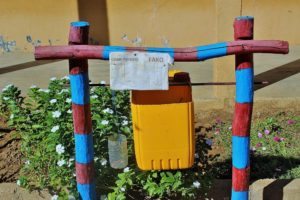 ket in Toliara. We asked where the money goes, fully expecting to hear that it is put back into the club, but were surprised and touched to hear that the club gives any money made from selling vegetables to the many street children in Toliara.  At this point the club explained the ethos of the school. Notre Dame de Nazareth was originally a catholic girls school but in recent years the school has started admitting boys. Our guides also told us that, although the school is still a catholic school, children from any religion can attend. Prayers are said every day at the school and every child’s religion is accommodated. And that is very much the impression you get from the school, that everyone is welcome and we were made to feel very welcome during our visit.

Eco- schools projects are amazing.  There are so many good ideas at this school. If the young people of Club Vintsy are anything to go by, the projects do encourage socially responsible learning, and teach socially responsible habits. They help people to engage with nature and make it a part of everyday life, make it a consideration in everyday life.  15 million young people throughout the world are interacting with their environment through Eco-schools projects and learning that everything in our ecosystem is connected including the people.  They are taking this knowledge and these habits with them into adulthood where, hopefully, they can make the future bright and very very green. 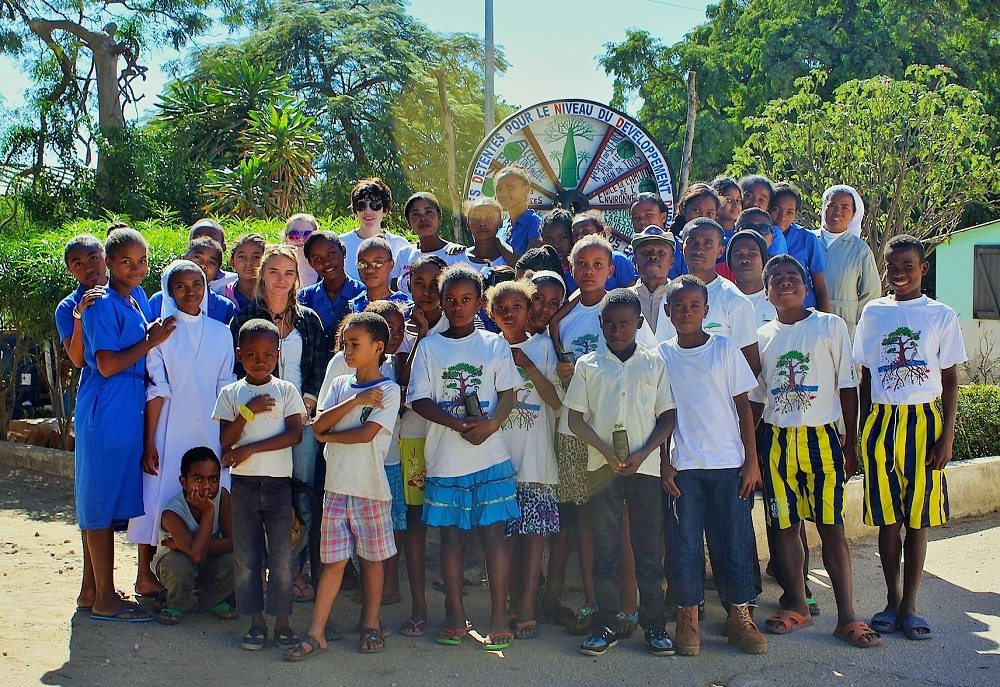