Abby is one of our latest research assistant recruits from the USA. With a bachelor in environmental science, she decided to join Reef Doctor to get hands-on experience and to help her decide if she wants to pursue a master’s degree focused on the social or the scientific side of conservation. In her first instalment, she describes her journey underwater building our newest artificial reef… 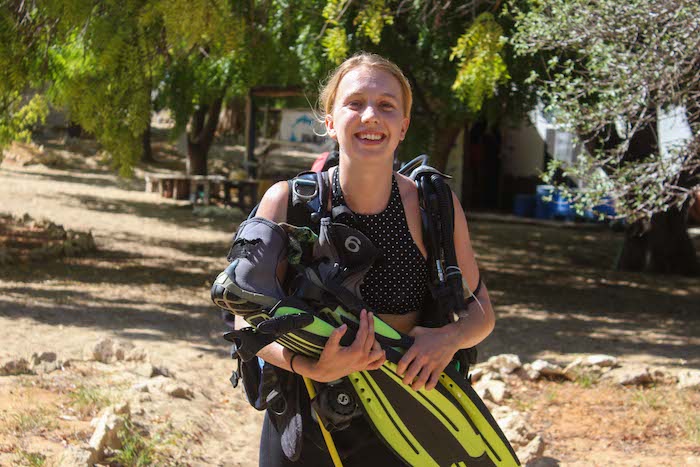 “Last Tuesday, five Reef Doctor volunteers/staff and I back-rolled off the dive boat, Ray, and descended about 20 feet to the site of our next artificial reef. At that moment, it was a sandy patch of seafloor littered with limestone chunks, enormous barrel sponges, and sea urchins clustered here and there. Our objective was simple—construct rock bommies in order to create habitat for reef animals—but the preparations leading up to this point have been extensive. Think: planning with community leaders, diving to scout a suitable site, hauling 100 zebu-carts of rock to the beach, blessings to wish the project success, and finally, paddling all that limestone a ways offshore to the buoys demarking the site. 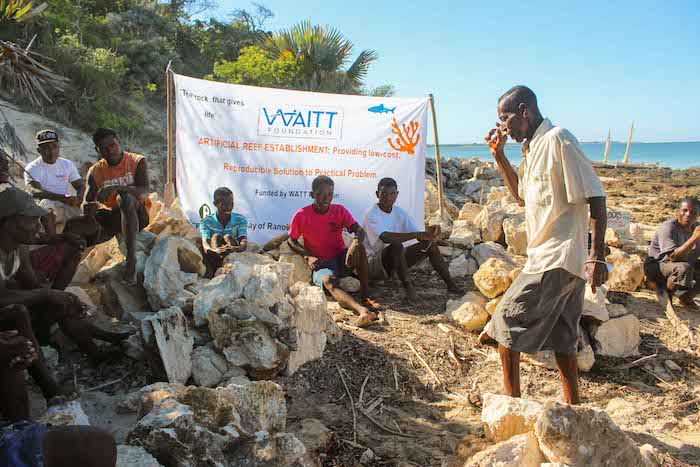 Once we all were positioned underwater with our fins off and booted feet firmly planted on the seafloor, Roberto, the Head Science Officer, signaled to us where to build the first bommie. While the others set off to retrieve the concrete piping we planned to incorporate into the bommie as habitat for large fish, I began collecting limestone. Of course, lifting any amount of weight is easier underwater, but it was almost comical to be able to lift and haul armloads of rock with ease. Soon enough, we had all assumed our roles as collectors or builders and were making progress quickly. With six people stomping about and dropping rocks, the most obvious difficulty to overcome was limited visibility—so limited that at times I could hardly see where my foot was stepping. Although this was a bit unnerving given the urchins in the area, we all managed to keep our feet spine-free. Forty-five minutes into the dive, the first bommie was nearly complete and I had breathed enough air to need to ascend.

After a quick lunch and surface interval (nap) on the boat, we swapped tanks and dropped down again. Hovering above our first finished bommie, we could already see sandperches weaving within its crevices and resting upon the limestone surfaces. We finned a few meters away, and Roberto gave us the ‘okay’ to start constructing there. During the previous dive, I had been mainly focused on keeping my balance and checking my air, as it was my first dive beyond the realm of recreational diving. However, on the second, I came to realize why the others had compared this type of diving with moonwalking. With eight kilogrammes on my weight belt, I was heavy enough to avoid floating away, but light enough to leapfrog and launch myself a couple meters. Then once I was weighted down even more with rocks, it was easiest to bound back to the site on the seafloor. With that strategy, four of us were collecting while the other two were carefully selecting and placing rocks. In order to create desirable habitats, it’s important to position the rocks in a way that creates gaps and tunnels, so that small fish and invertebrates can hide within these shelters. On the contrary, it’s even more important to build the structure sturdy enough to ensure it doesn’t topple when confronted with powerful waves. 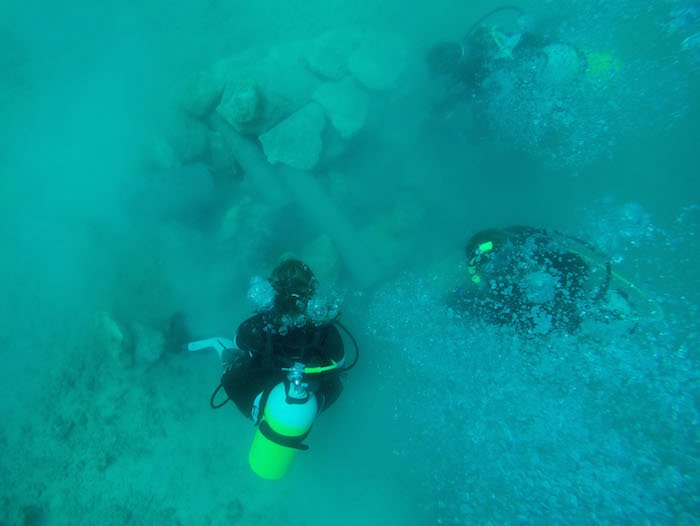 Again, I was the first who needed to ascend, so my dive partner, Katharina, and I headed up. A few minutes later, the others finished the second bommie and joined us. With the wind blowing towards us, we made a slow journey back to ReefDoctor. In the coming weeks, we will work to complete the next eight bommies. The finished artificial reef will be named Vato Mahavelo II, after our very first artificial reef located next to the MPA Rose Garden.” 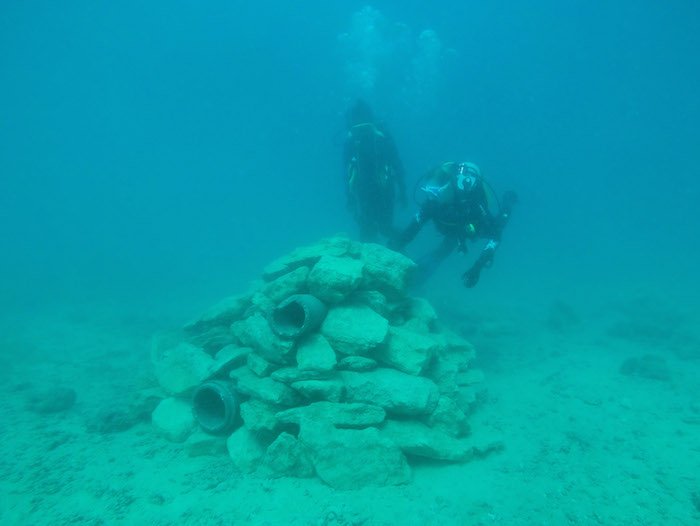 A Healthy Life From a Healthy Sea