July 26th is International Day for the Conservation of the Mangrove Ecosystem. Along with coral reefs and seagrass, mangrove ecosystems are amongst the most threatened ecosystems on Earth. The Reef Doctor Honko Project works with local communities and authorities to conserve and restore mangrove ecosystems in the Bay of Ranobe.

World Mangrove Day is celebrated every year in our area, as many communities depend on mangroves for their livelihood.

This year, Reef Doctor played a part in two events that took place separately in Ambondrolava and Andrevo and were attended by the Director General of Partnership and Sustainable Development to the Ministry of Halieutic Resources and Fisheries, the Chef de Région Atsimo-Andrefana, DRRHP and DREEF. 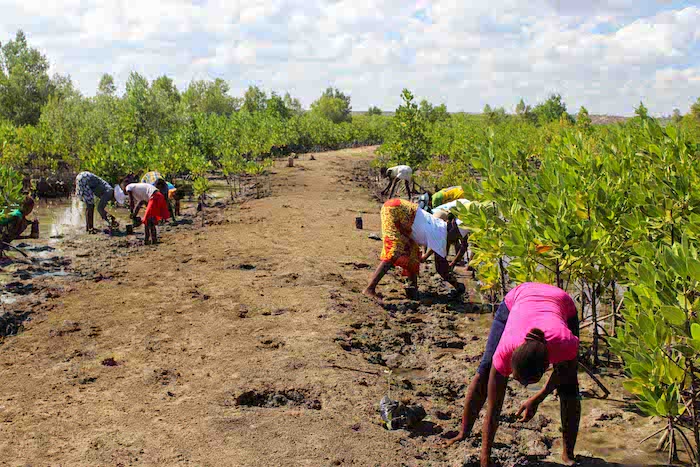 The authorities departed Toliara in the morning to arrive in Ambondrolava, where they would make their first stop. Ambondrolava is the village where the Reef Doctor Honko project is established and since the beginning of 2017, 15 hectares of mangrove of 3 different species have been planted. World Mangrove Day has been celebrated in Ambondrolava every year since 2008. The event was organised by VOI Mamelo Honko and Reef Doctor and more than 300 people from neighbouring villages attended. A total of 4.5 hectares of mangroves of 2 different species, Ceriops tagal and Avicennia marina, were planted. Aside from the planting, dance contests as well as men and women football games were organised. World Mangrove Day is a great tradition that people really enjoy as well as an event to raise awareness on the importance of mangroves. 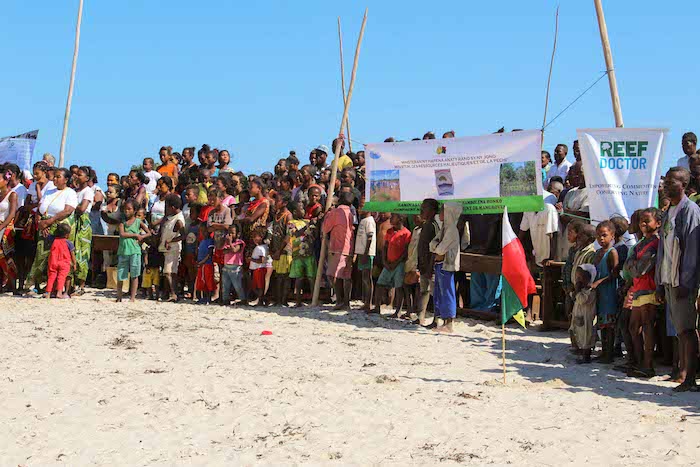 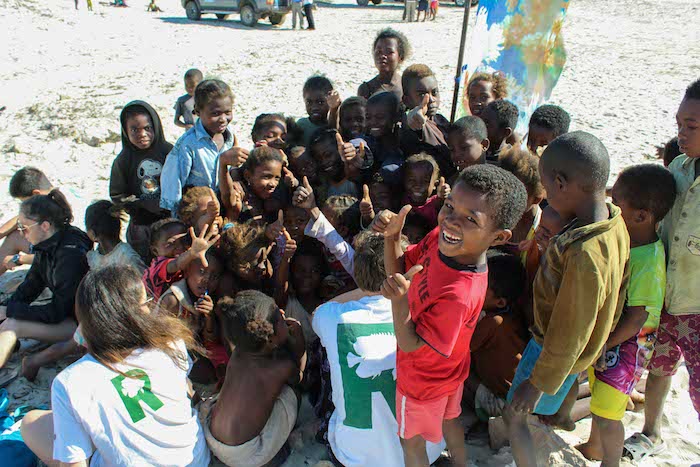 Almost all Reef Doctor’s volunteers and interns went to Andrevo for the planting event. Some were already there since the day before as they attended a sea cucumber sale in the evening. Arriving quite early for those leaving camp in the morning, waking up quite tired after the short night for those who spent the night in Andrevo, everyone gathered at the place where the ceremony would take place. The wait was lengthy, but curious and cheerful kids coming to interact with the volunteers and interns passed the time! Lindsay, one of our volunteers, had the great idea to introduce us one by one to the kids and they shouted each name with lots of laughs after she pronounced them. A local women, dressed all in violet, started dancing confidently all by herself, putting on a nice show for everyone. Ale, the brother of one of our aquaculture intern, who came to Reef Doctor to document our work through photography, didn’t wait long to join the woman to dance, driven by the rhythm. 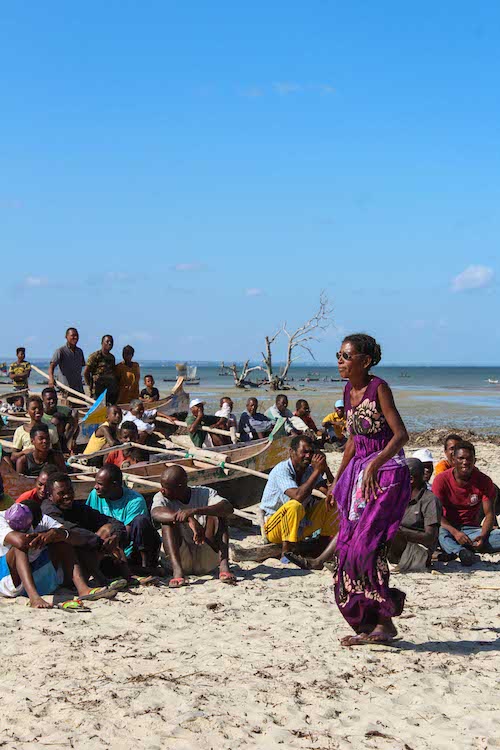 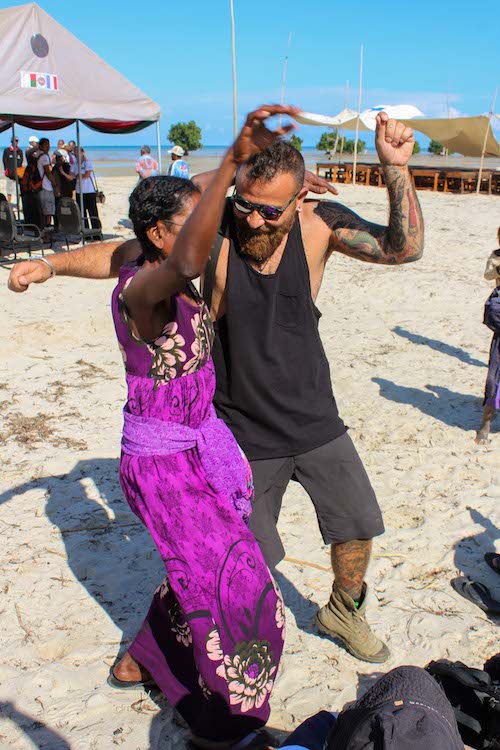 After the arrival of the authorities, everyone took their place and the speeches started. Lala, the head of our aquaculture department, was tasked with the translation of the speeches to the volunteers and interns. In between speeches, the women’s association of Andrevo entertained the crowd with their lively dance and songs! 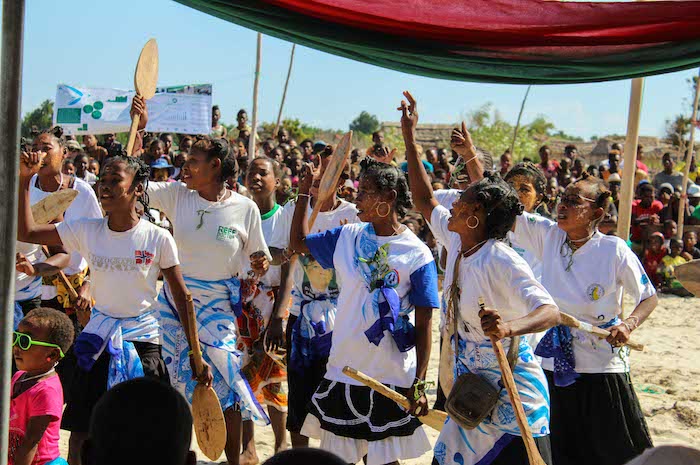 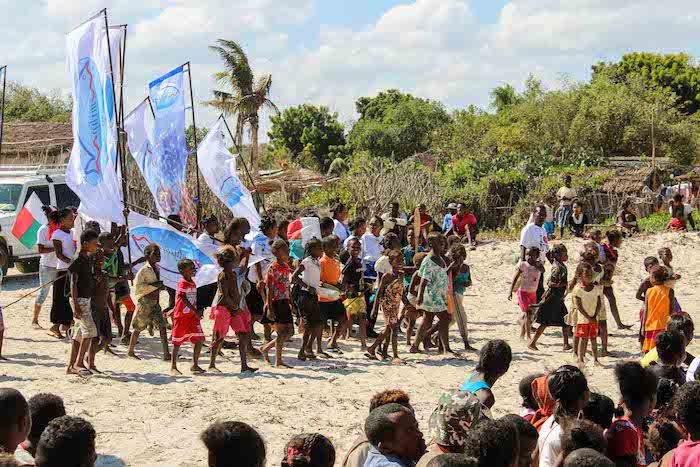 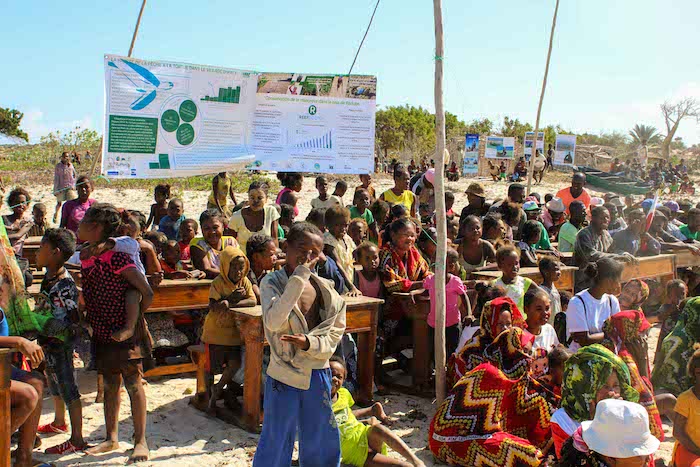 After the speeches, it was time to head to the plantation site in the mangroves for the main event. 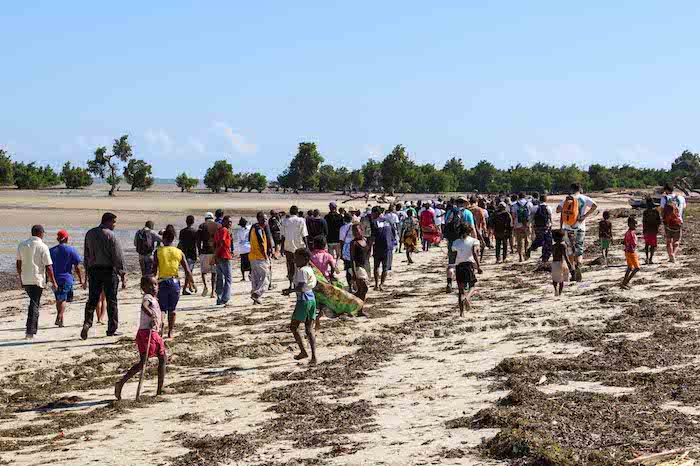 Everyone together, high authorities, mayors, president of fokontany, staff, volunteers and interns of Reef Doctor, men, women and children started walking towards the mangrove. Feet in the muddy mangrove soils, everyone took a handful of propagules and started planting them straight into the ground up to one third, as explained by Josepha before the planting. 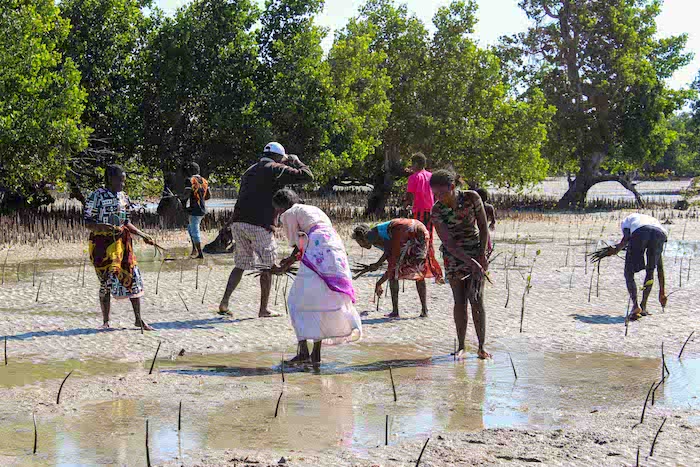 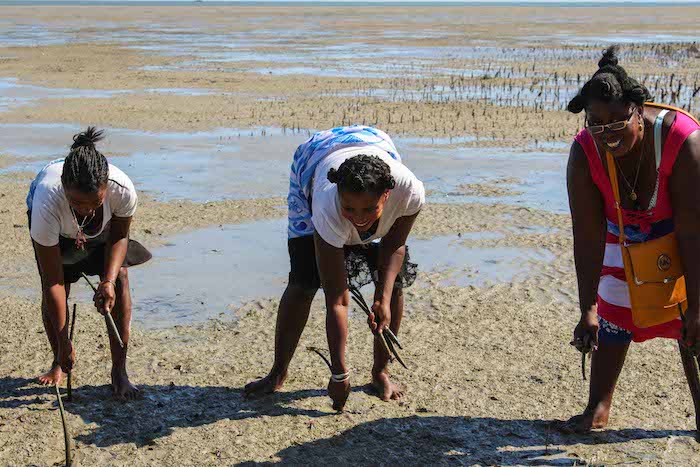 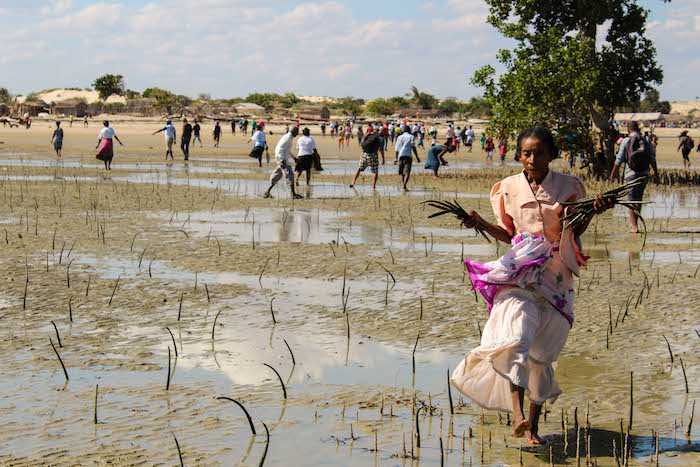 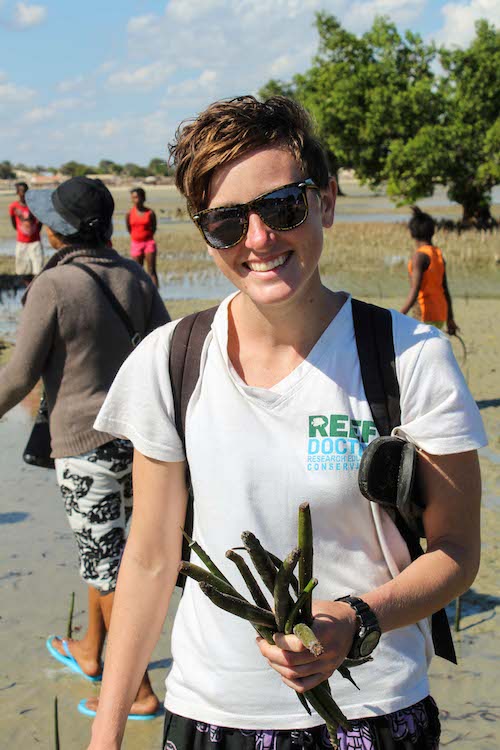 Once the 4 hectares completed (2 hectares had already been planted by the communities), everyone made their way back to the ceremony site to have a drink and a few snacks while listening to frenzied gasy music. While most volunteers and interns sat down to relax after the planting, one of them tried her hand at gasy dance with some children, before being joined by a woman who seemed bewitched by the music! 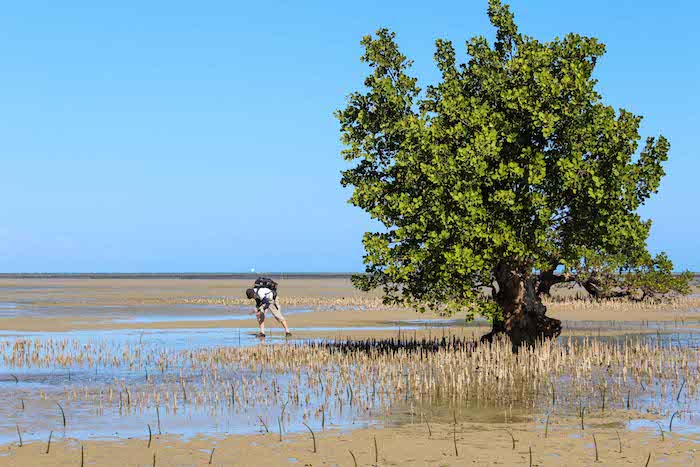 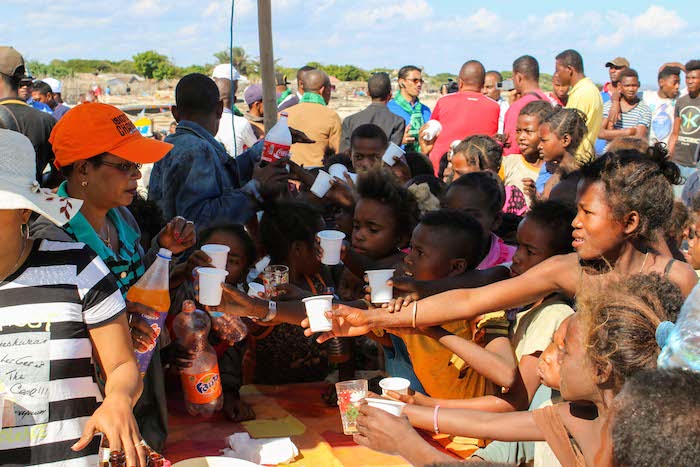 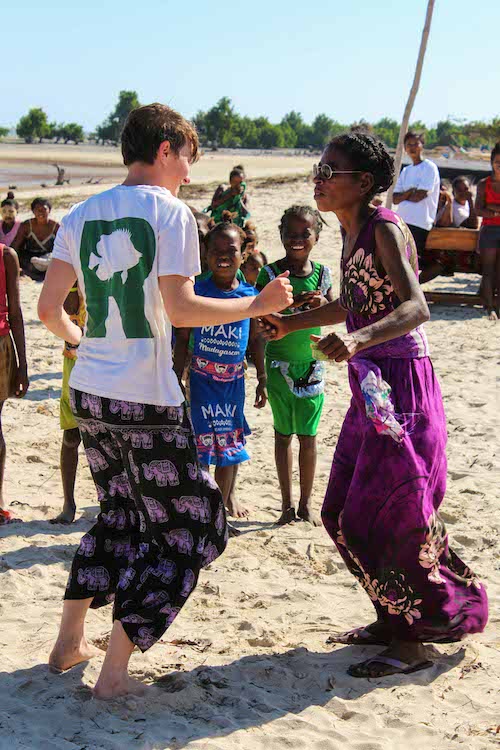 It was in a joyful atmosphere even if everyone was tired, then we said our goodbyes to the people and the village and hopped on our taxi brousse to head back to the Reef Doctor camp. 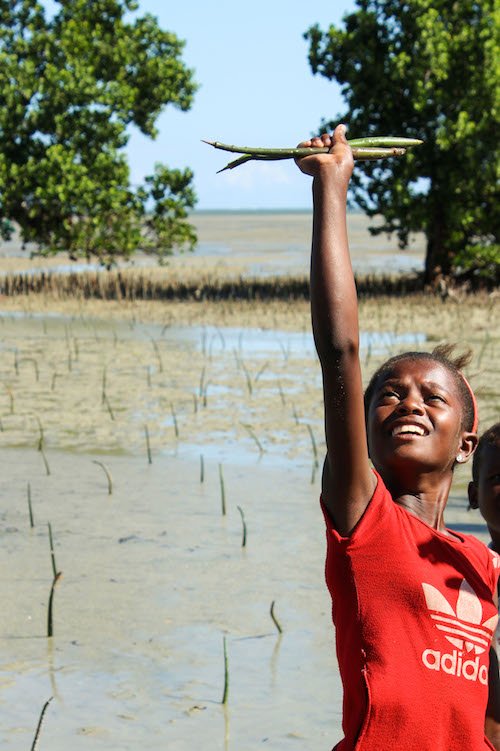