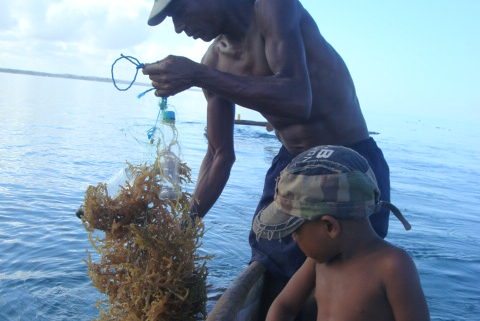 eaweed and sea cucumber sales are now taking place monthly in the Bay of Ranobe and the results are impressive. In the village of Betsibaroke, seaweed farmers had their first sale, and sold a whopping 2,402 kg of dried seaweed.  Together with the villages of Ifaty, Mangily and Ambolomailaky, over 5,000 kg of seaweed was harvested and sold in March.  For the sea cucumber farming villages of Andrevo and Ambolomailaky, almost 1,600 sea cucumbers were sold over two nights.  Combined, our Darwin Initiative funded alternative livelihoods project injected 3,073 USD (9,635,500 MGA) into the economies of these villages.

With such large scale success across the bay of Ranobe, it is sometim 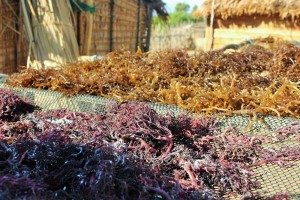 es easy to forget the impact that this project is
having at smaller scales.  With this in mind, we explored how alternative livelihood activities are reducing vulnerability and enhancing well-being in the Bay.  Ivana Rubino spoke with households engaged in seaweed and sea cucumber farming about their experiences, and we will be sharing these insights with you in the months to come.  The first account is of seaweed farmer Ferolle and his wife Vola. 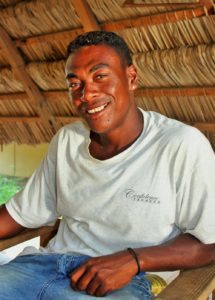 “When I only relies on fishing I could come home with no fish,” Ferolle says.  “Life is easier now and is less tiring. Fishing is tiring but that is now a second activity after seaweed farming”.  Ferolle is a big man, and it easy to imagine him rowing his lakana (ocean-going pirogue) out of the Bay to find the big fish in the Mozambique Channel, or hauling in his large fishing nets.  He does not look like the sort of person to tire easily, and his comments speak more to the difficulty of fishing as a livelihood, than his personal stamina.  “I still fish three afternoons a week, (but) I am no longer worried about finding food.  I can always expect to get something at the end of the (seaweed) growing cycle”.

Ferolle and Vola have been farming seaweed since early 2015.  Ferolle grows the seaweed in the water while Vola dries the seaweed and takes care of the operation on land.  Their success at seaweed farming has allowed Ferolle to expand his experiences and he has received further training as a community seaweed technician.

“I always enjoyed seaweed farming, but being a technician is very cool”, he says.

As a community technician, Ferolle assists villagers that want to start farming seaweed.  He teaches them how to manage their seaweed ropes to grow the best seaweed, and how to solve any problems that might arise.  “I had the opportunity to learn, and now I have the opportunity to teach others”.

It is clear that Ferolle and Vola’s involvement in seaweed farming is improving their quality of life.  “Our extra 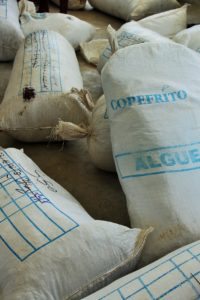 income depends on what we produce every month but with the money we have made we can make provisions that we could not make before. We have more time and more money and can take care of our family better.  Things I didn’t have before or couldn’t afford, I now can have.”

For Ferolle, part of reason he enjoys seaweed farming is that culturally, it is similar to fishing.  “It is good to be able to combine farming and fishing.  The seaweed project could have been started a long time ago”, he says.  Ferolle identifies with the Vezo people of southwest Madagascar – those who make their livelihoods from the ocean.  The sea and fishing are integral parts of Vezo culture, and form their group identity.  “It fits with the Vezo lifestyle because it is not taking away part of being Vezo. It suits Vezo life”.  Ferolle and Vola’s success in seaweed farming is largely dependent on how well it conforms to the local culture.  “I enjoy it as a Vezo man”.