Here is the second blog instalment of our aquaculture intern, Nathaniel Maekawa, in which he describes his experiences working on Reef Doctor’s sustainable livelihoods programme and life in Madagascar. 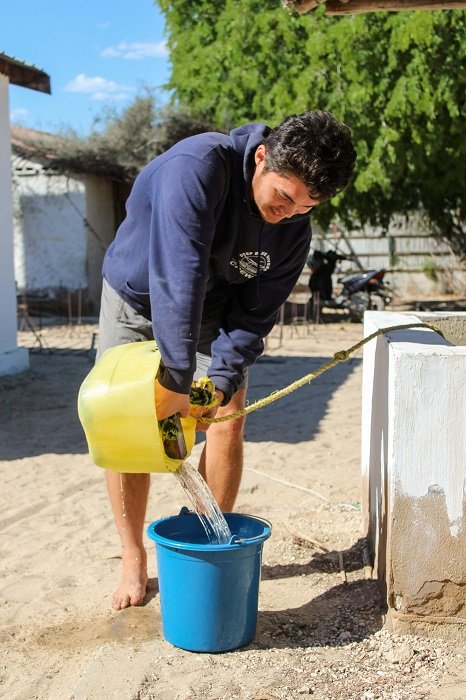 Time is certainly flying by over here in Madagascar. Where once I was stranded with two cups of well water to rinse suds off of my entire body, I have now perfected a bucket-shower water distribution ratio (trademark pending). I’ve lost sight as to what parts of my skin have tanned, burned, or simply darkened as a result of the several layers of dirt that blanket its true pigment. In just two weeks, even my threshold of surprise for a taxi-brousse ride has been elevated. My first day’s journey with over 25 people seems pretty ordinary when you compare it to the time that I clung to a brousse’s roof rack and dangled on the side of the truck with four others. As the inside of the brousse had finally been filled to capacity, the drivers still wanted our business, and we still wanted a ride, this was a course of action consented to by all parties. Although the speed bumps (and interpretation of said speed bumps) could ignite the pulse and force a quick readjustment of hands and feet, everyone on the brousse had a laugh or at least a smile about the situation at some point. As the brousse chugged along, it occurred to me how if you disregard the amount of fuel that the refurbished engine is probably guzzling, its overachieving standards for transporting large amounts of people is a cool blend of environmentally friendly action and community building. Alas, these, and the wish to stay alive, are the thoughts of an environmentalist while clinging to a taxi-brousse. 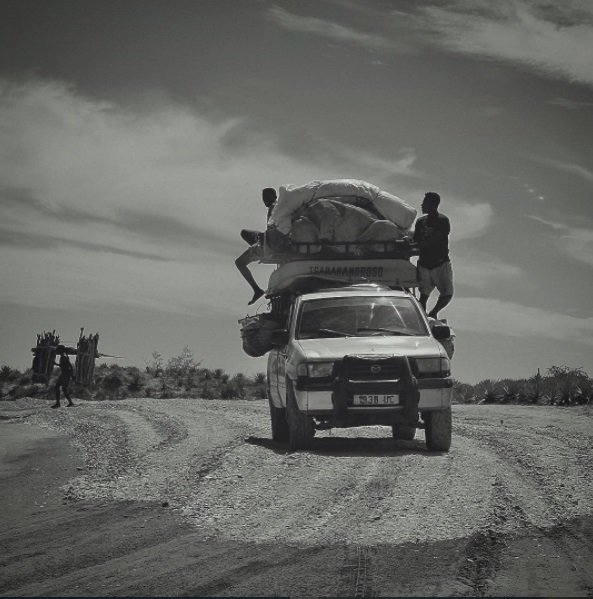 This week in aquaculture, I helped to continue the therapeutic maintenance of our seaweed lines (it’s a mutualistic relationship), inputted data on regional turtle mortality (calculated by the recording of turtles that were sold in markets), and got involved in a session that focused on the goals and direction of the aquaculture program. Since aquaculture works closely with the communities where sea cucumber and/or seaweed initiatives have been started or are developing, there are many opportunities for interns to get involved in ground-level work. For example, when news arrived that a sea cucumber transfer was happening in the village of Andrevo, we were invited to go to the village and see how the process is carried out. Meeting one of the aquaculture staff members in the early evening, he guided us through Andrevo and introduced us to aquaculture farmers, technicians, and friends of Reef Doctor. Since the sea cucumber pens are most accessible at low tide, and sea cucumber behavior is most active at night, we had plenty of time to kill before the 11:30pm transfer. Thus our party of eight, composed of local technicians, Reef Doctor staff, farmers, a fellow intern and myself, walked to one of the village bars. 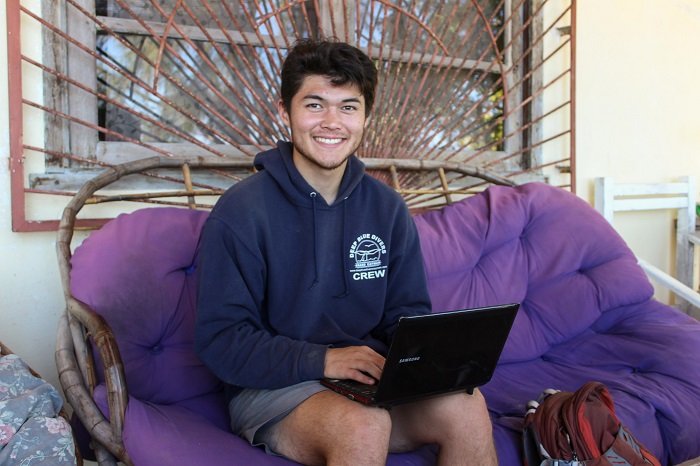 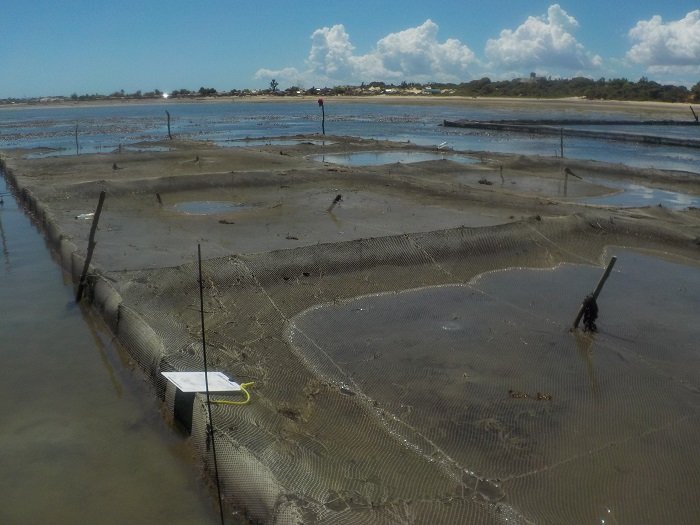 The structure of the building that we sat in differed from the typical wooden huts seen in most of the villages. I would soon realise that the aluminium encasement, supported by wooden beams, was to entrap the booming sound of Malagasy and French House music. Despite the upbeat auditory atmosphere, the eight of us sat quite properly at a small, wooden table, becoming acquainted over a few drinks, shouted words, and gesturing when our lungs could no longer compete with the speakers. As a bowl of grilled fish was brought over to our table, I felt a cultural test looming before me. With no utensils and several medium sized fish sitting between all of us, I waited so that I could hopefully mimic the right technique. One of my bosses reached in first, and without hesitation, took a chomp out of the fish’s head. With a demonstration complete, I did the exact same. Chewing the head and realising it wasn’t that different from the rest of the fish, I watched the next man go. A local technician, the man picked up his fish and delicately removed the head before placing it in the bone pile. Apparently fish head was more of a personal preference than a cultural thing.

After our time at the bar, we walked back to the hut that was offering us accommodation for our overnight stay. The residence belonged to a sea cucumber farmer named Perine. One of the most productive farmers in the region, Perine is a spectacular icon for how the sustainable livelihoods project can provide economic opportunity and autonomy for women in Southwest, Madagascar. She was also a wonderful person to meet, and graciously supplied us with a delicious meal, rice tea, and warm beds to sleep in.

Following our dinner, our group of four (Reef Doctor staff and interns) took a rest until the beeping of an alarm called us from our slumber at 11:30. Under the light of the stars, we walked to the beach and wandered towards a covered pavilion. Silhouettes in the night, thirty men and women sat waiting there for the signal to head out to the pens. When the go ahead was given, we all sloshed out in the low tide for the juvenile sea cucumber transfer. While I witnessed the farmers and technicians counting and collecting sea cucumbers, and killing predatory crabs, I was able to learn more about why the process takes place. Since the sea cucumbers start out very, very small they need to be raised in nursery pens with extra mesh protection to avoid their predation. As each sea cucumber is a potential profit, their vitality equates to economic sustenance, and is therefore very important. Once the sea cucumbers reach 50 grams, they are large enough to avoid predation on their own, and can be moved to the adult pens to grow until they are of commercial size. Reef Doctor acts as a facilitator between the sea cucumber supplier and the community, so that villagers have access to this opportunity but are also given fair representation. This representation is pertinent as it is the foundation for the community to develop sustainably and with agency. 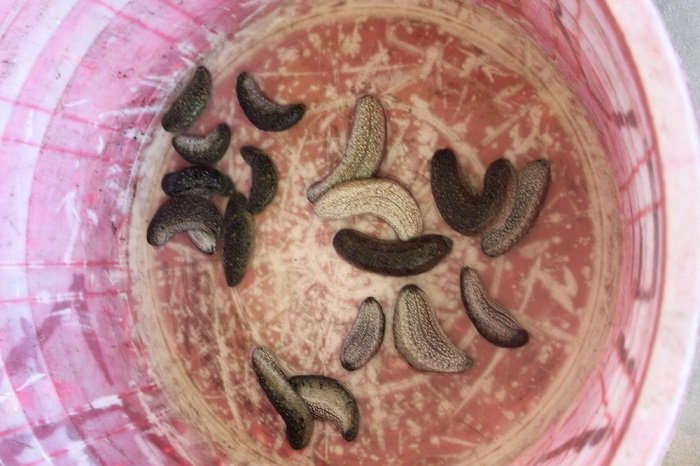 As I mentioned previously, time is truly flying by. However, it is reassuring to know that this time is being well spent. Other projects that I have been fortunate to be a part of this week were an anti-desertification planting to protect mangroves, and a community’s first seaweed sale since an outbreak of the tenacious seaweed disease EFA (Epiphytic Filamentous Algae – gnarly stuff). I’ve also become the proud (and skeptical) owner of a laptop bought in Tulear! With my original laptop sustaining water damage somewhere in my traveling, and my phone’s charging jack out of commission, this little laptop stands as my strongest connection to the world back home. I’m pretty happy with it at the moment, but it is a little unfortunate that I will probably be put on some sort of watchlist the minute I turn it on in the United States. Until next time.” 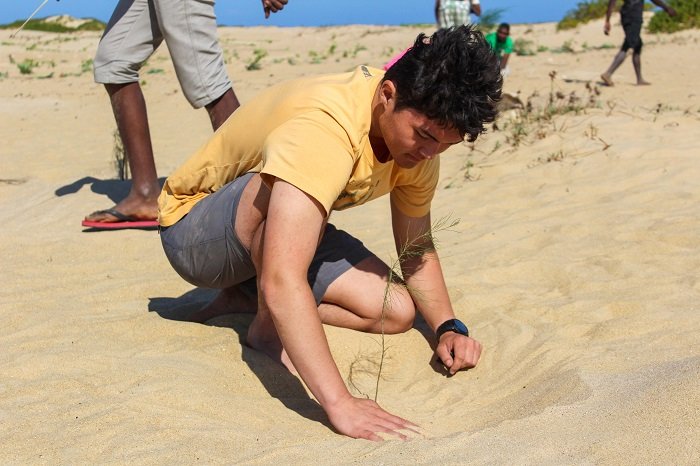 Seaweed Gets Stressed Too