“The water leapt at my knees as I stood next to the watchtower. Headlamp beams darted back and forth, illuminating purple and green plastic tubs that floated along idly. Piled within each bin, to the brink of falling out, were dozens of Holothuria scabra, the golden sandfish. Keeping one hand on their floating harvest and two eyes on the scale, the sea cucumber farmers formed a circle around myself, the technician, and the weighing table. One at a time, each farmer would push his/her haul over the water and up to the wooden station. Within seconds, the table would be scattered with sea cucumbers. Despite the streams of sea cucumber orifice water that squirted onto my sweatshirt, my concentration held firm. With hundreds of sandfish to weigh and 20 farmers depending on our efficiency, my eyes remained locked on reading the scale and recording the market results. Since sea cucumbers below 450 grams were deemed too small for commercial sale, these were effectively sorted and launched across the table into a bin for the farmer to take back to the pens. When a farmer’s harvest had been accounted for, I declared the result in French so that the technician could give the farmer a ticket for payment. Fast-paced and chaotic, minutes quickly became hours. During a moment of reprieve, I paused to take in my surroundings. When thinking of the scenario from an abstract perspective, the incredulousness of the situation began to seize me. Would anyone believe the time that I partook in a starlit sea cucumber sale, off the coast in Madagascar, speaking French, and being doused by sea cucumber juice?

As my days at Reef Doctor steadily accumulate, the responsibilities that I am entrusted with have grown in quantity and importance. This past week, I delivered my first sustainable livelihoods presentation to a group of volunteers and interns. Speaking about the importance of our fisheries collection surveys and the state of global and small-scale fisheries, I felt amazed at how easily the information slid from my mind and into coherent words. Through the hands-on work that I have partaken in at Reef Doctor, I have been able to absorb the importance and breadth of the sustainable livelihoods project. It is definitely a good feeling to be in a position to impart knowledge and inspiration for this project to people that have an interest in contributing to its success. 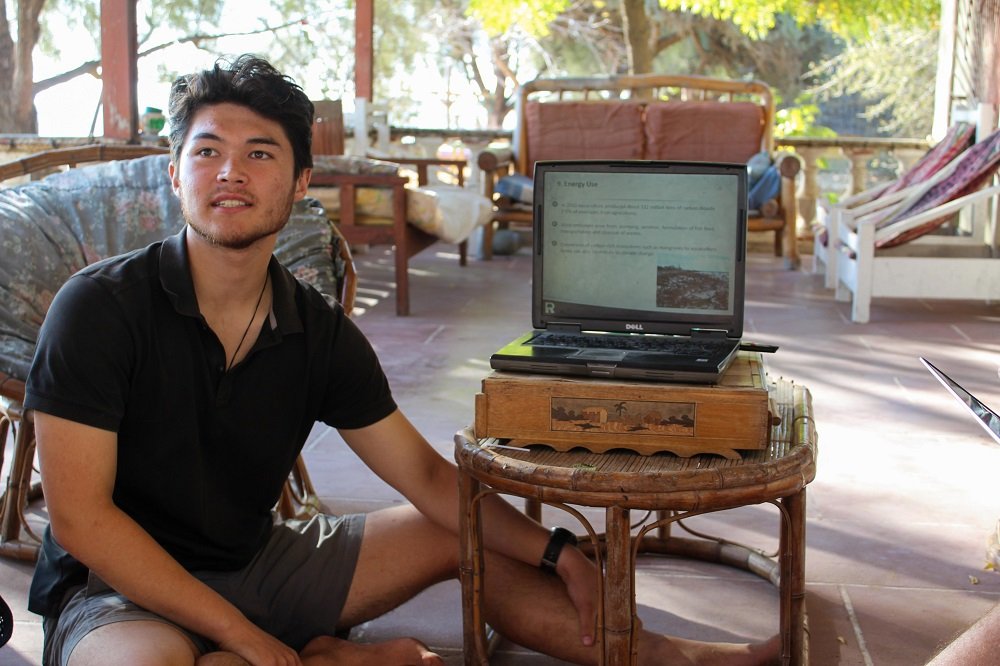 Other aquaculture happenings have included an update on the results of last week’s seaweed sale, and the reconstruction of juvenile pens in Andrevo. Over 13 tons of seaweed were sold across the Bay of Ranobe, which is on track with Reef Doctor’s goal for project expansion, and actually three tons over the projected sale estimates. These promising results are in line with Reef Doctor’s aspirations for community development, and everyone is working diligently to ensure that the results are sustained going forward. With Madagascar’s Independence Day following the weekend of the Bay’s outstanding seaweed harvest, there was much reason to celebrate. As for the rebuilding of pens in Andrevo, a fellow aquaculture intern and I village-hopped the morning after the sea cucumber sale in Ambolomailake, to help with the pen modifications. Since the mesh spacing on the previous juvenile pens was too large, baby sea cucumbers were being carried out of their enclosures with the tides. To avoid future losses, the mesh fencing was replaced with one that had smaller gratings. Although the language barrier was evident while we worked, our involvement with the labours of digging, mesh cutting, and stake re-establishment, brought about an unspoken communion. Working side by side with the farmers also led to my learning of some new Vezo words. While my pronunciation and display of charades to signify my interpretation (or in most cases misinterpretation) brought about some laughter, it was all in good fun. 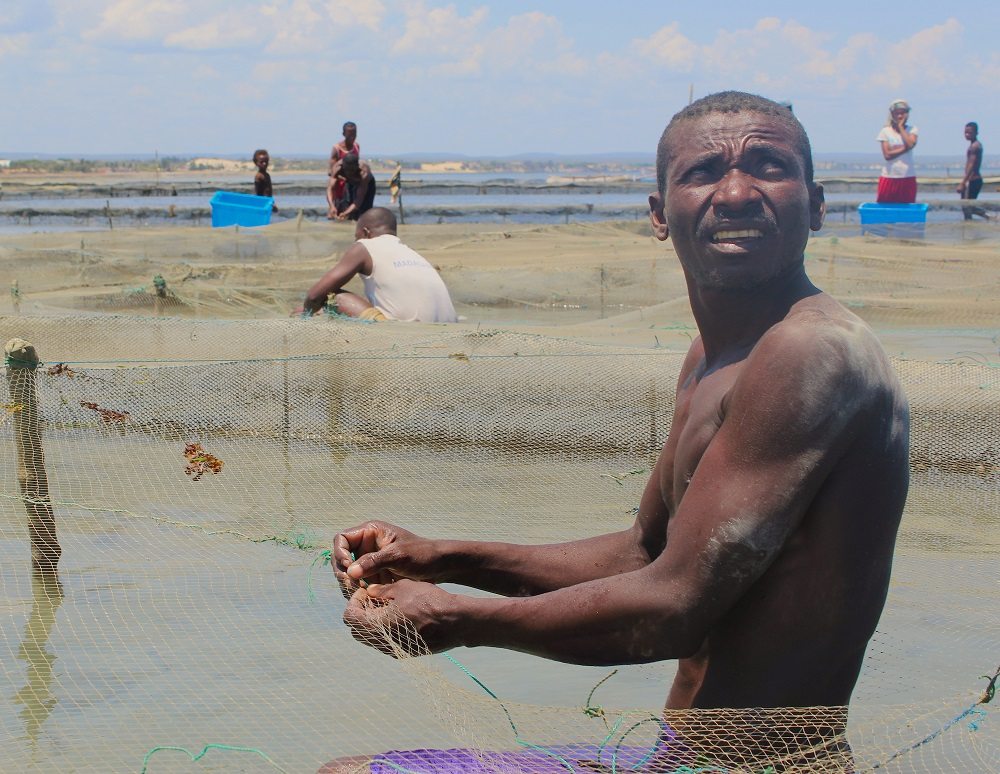 Weekends provide opportunities to experience some of the natural attractions of Madagascar. This weekend, I made my way north to the Spiny Forest outside of Mangily. Walking amongst the funky baobabs and prickly vegetation, I could hear David Attenborough’s voice dramatically narrating in the chambers of my mind. The guide was very knowledgeable about the practical uses of the plants that we encountered, giving examples that ranged from traditional medicine to the creation of pirgoues that we row out to our seaweed farm. One of the highlights of this excursion was seeing my first lemur! My friends and I took an immense fascination with watching the little dude as he chilled in a tree, and after several minutes of our intent observation, the guide ended up shaking the tree to retrieve us from our trance and send the lemur on its way. Overall, it’s been another productive, exciting, and educational week at Reef Doctor. After a long and exhausting day, the stories often continue, as my mind traverses into a malaria-medicine induced rollercoaster of dreams. Yet with midnight sea cucumber sales occupying my time spent awake, it’s sometimes difficult to differentiate my outlandish dreams from my outlandish reality. Until next time.” 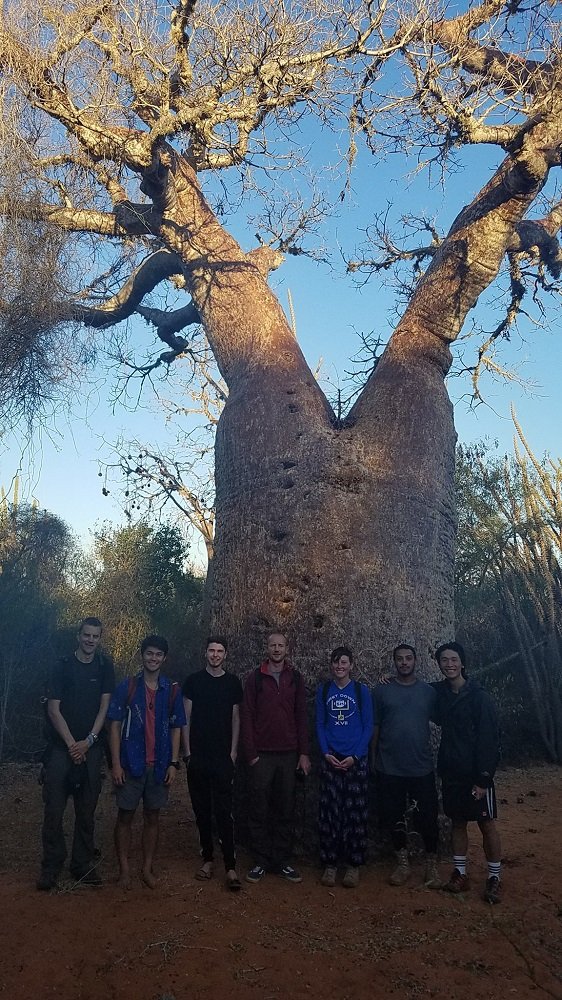