The village of Ambolamailaky had another successful sea cucumber sale on Tuesday 9th February, as part of Darwin Initiative-funded Alternative Livelihoods Programme.  It was a very busy sale because all of the 20 farming households in the village had a good harvest.

Spring tides occur directly after a new or full moon and bring the greatest difference between the high and low water levels. Sea cucumber sales take place during the spring tide because the pens are more exposed by the very low water levels. As the tide started to go out on Tuesday night the farmers set out for the sea cucumber pens. Each farmer opened their pens and collected the sea cucumbers in large basins. Once they had collected all the sea cucumbers that had reached sale weight, they were brought to the weighing station for processing.

Despite it being close to midnight when low tide occurred and the weighing began, the atmosphere was lively and 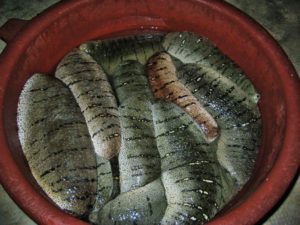 everyone was in high spirits while the processing took place. Weighing takes place as quickly as possible so that all the sea cucumbers can be processed before the tide starts to come in again. By 2:30am the processing was complete and everyone left the farms to return to the village for a few hours sleep before 6am when the final stages of the sale took place and the farmers were paid for their crop.

A total of 971 sea cucumbers were sold. This generated an income of 4,389,000 MGA. The equivalent in US dollars is $1385, giving each household an approximate income of $69 USD or 21,9450 MGA since the last sale in December. Due to the high quantity of sea cucumbers reaching market size, sales will now take place in Ambolamailaky on a monthly basis – or more frequently if there is sufficient stock within the pens. This exciting development is further evidence that sea cucumber farming can be a sustainable and reliable source of income for the community, providing the farmers with security and hopefully an end to the daily struggle of rural poverty.

Working Towards Gender Equality and Poverty Alleviation in the Bay of Ranob...
Scroll to top