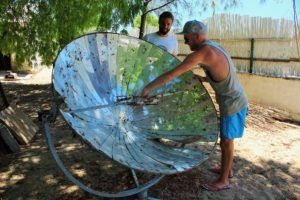 Reduce, reuse and recycle. This concept has always been important to me in every day life. I buy things and keep them until they are falling to pieces. But the idea of reusing and recycling as much as possible makes even more sense to me here in Madagascar, where people have to keep using things long after parts have broken or worn down. Some people have even made a living out of it.

Once or twice a month I go to Toliara to buy essentials that cannot be bought locally. One of the essentials I needed recently was to have some refillable disposable lighters filled. You can buy a cheap lighter in any shop in the area for 400 MGA, that’s less than 10p GB. They work reasonably well apart from the fact that they explode sometimes or the metal cover gets too hot and pings off! Minor issues but what can you expect for 400 MGA? The real problem is they cannot be refilled. Once they are empty they have to be thrown away (I still haven’t come up with a use for an empty unfillable light 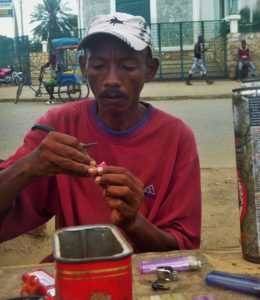 er). However, I was given some refillable non-lethal lighters recently by a volunteer who was going back to Europe so I decided to get them filled.

In the market in Toliara, a man called Jean Claude sits in the sun all day at a small table in the median strip of the road. For 500 MGA he will refill your lighter. I was willing to pay the extra 100 MGA to save on the plastic so I went to see him on my last trip. He filled the first lighter but it wouldn’t work. But then he took the lighter apart and replaced tiny springs and shaped thin pieces of wire to insert in the lighter. The work was so tiny he used small pliers to get the ‘spare parts’ he needed from an old reused tin. I really didn’t think it would work but two minutes later he filled the lighter, tested it and handed me a fully working lighter before moving onto the next one. 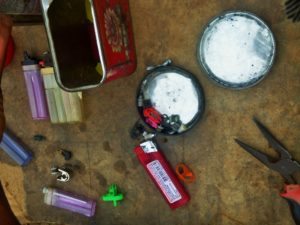 I doubt he earns very much money (very few people here do) but he is in the market every day fixing disposable lighters.  It is sad that someone has to eek out a living from fixing and filling lighters rather than have a chance to get a good education and well paid job but the idea of earning money from fixing something that was designed to be used temporarily and then thrown away really strikes a cord with me. Of course he doesn’t do it to save waste plastic. He does it because he needs to eat. But he is making something out of rubbish, something that most people would throw away without a second thought.

This is also true for the shop in Toliara that makes flip flops from old tyres. For 5,000 MGA (a little over £1 GB) you can have a pair of sandals custom made from an old tyre. They are very comfy by all accounts (I’m not getting a pair until my flip flops have completely checked out), and they make great souvenirs. 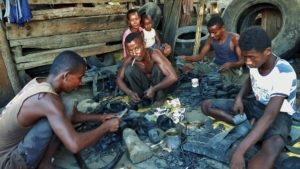 At Reef Doctor, we reuse and re-purpose as much as possible from collecting empty water bottles to make floats for the seaweed farms to composting food waste. Empty jars become powdered milk containers and no one ever throws away a plastic bag (on 1st October 2015 it became illegal for shops in Madagascar to give away plastic bags). Almost everyone on camp has a plastic bag in their back pack to store street food bought in the village so as not to use up the vendors paper cones made for holding food (they have to buy exercise books or use their children’s homework!). A group of the interns and staff are currently working on a project to re-purpose an old solar oven into a dome structure to grow coral on for our latest coral gardening project – more about that at a later date. 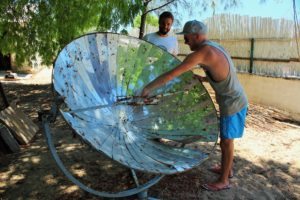 When you have very little you are forced to take care of things or use them long after they have become shabby or broken. It is shameful in this century that there are people in the world who have so little but it is so important to look to these people to remind us that everything does not have to be clean and new or pretty to look at, with a reputable name attached. It just needs to work. While having breakfast at a hotely (Gasy restaurant) in the Tsingy National Park in October with friends we saw a bowl outside the hotely that had been stitched up. It has obviously split at some point (more than once) and rather than throw it away someone stitched it back together. It was no good for liquids anymore but it was perfectly serviceable for dry food, of which it was full.

I am humbled by how people achieve so much with so little here. I’m not saying that we, in developed countries, should live in the same way. We are privileged to have everything we have and we should not forget that. But being here has made me consider, even more, where products I use come from and where they go to once I am finished with them and I am trying to hold onto everything just a little longer and re-purpose as much as possible.