In this article, Reef Doctor intern Katie Riley provides an insightful account of women’s rugby in Ifaty and what it represents for local women.

“For the past month I have joined th 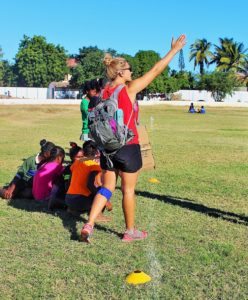 e Ifaty women’s rugby team as they have practiced for a sevens friendly against the women’s team from Tulear. Before I came to Reef Doctor, I was very excited to learn that rugby – especially women’s rugby – had a presence in Madagascar; however, I did not realize what an understatement that is. Rugby is Madagascar’s national sport, and has built a fanatic following among the Malagasy people; even our daily practices regularly drew a crowd from the village. This environment is markedly different than where I learned how to play rugby, in St Andrews, Scotland, where our league games would draw crowds of about 10 people (and we even won the league one year!). However, general enthusiasm, for women’s sports as well as men’s, is only one of the many differences I noticed. On that note, here’s a bit on rugby, Gasy style.

The women’s team was created in 2010 after the local coach (of everything – football, swimming, running, Men’s rugby, etc.), Elias, took a course on coaching rugby for women. Elias thinks that one of the major problems in Ifaty is that the women don’t have any hobbies, nothing to do all day (outside of their regular work of taking care of the home). He started the team as a way to keep the Ifaty women out of sex tourism by providing them with a positive activity. The sport caught on. Today, Elias and Bernard André coach two teams in Ifaty: one for adults, and one for girls. The adult team consists of about 24 women with an average age of 25; while on the kids’ side there are 30+ girls with an average age of 12. While the main goal is still keeping the kids away from prostitution, the team’s growth has provided the girls the chance to dream of a better future. Some women from Ifaty have already been recruited for the national team, which has created a sense of determination and pride among girls who previously didn’t have many people to look up to. 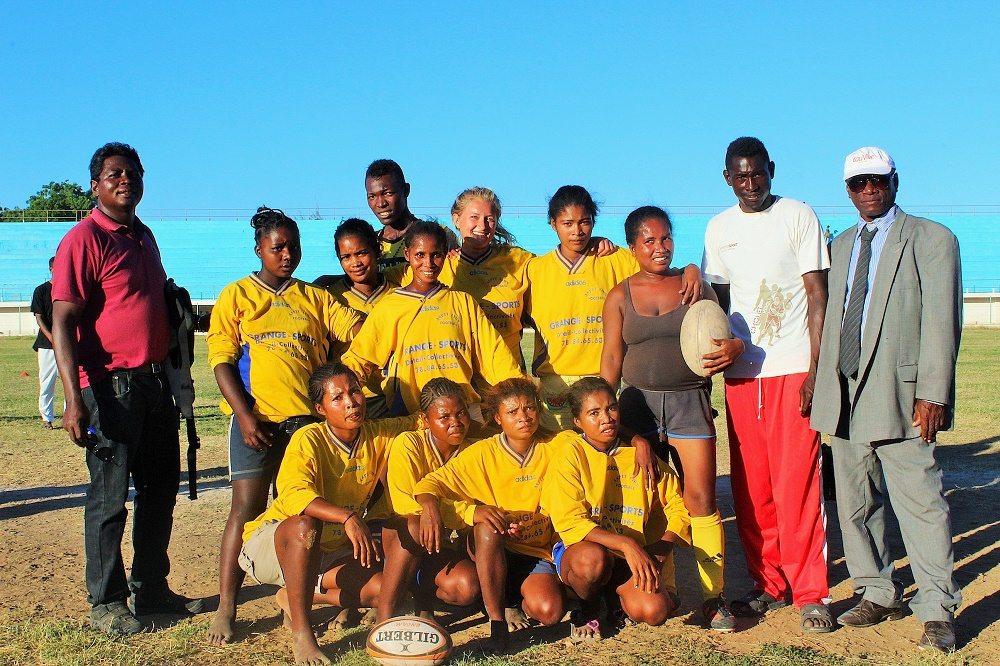 The Ifaty team plays on the local football field, which consists of sand, little rocks, bigger rocks, rock substrate underneath a centimeter of sand, and the occasional spike or ten. Practice starts when Coach Elias makes his way to the field, blowing his whistle incessantly throughout the village. The girls come in whatever they own: jean shorts, dresses, skirts, bathing suits, often with necklaces, earrings, and very long nails. Many of the things we take for granted in the West simply aren’t present here: there is a distinct lack of water, first aid, nail clippers, mouth guards, shoes, sports bras, and game kit. During games, the Ifaty team wears the jerseys of the men’s football team; if they want to wear shoes, they must borrow them from another team or go without. However, what they lack in kit, they make up for with determination. As far as how the game 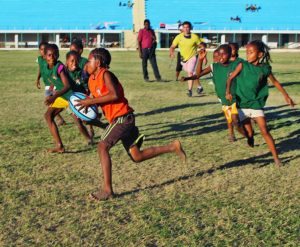 is played, when these girls hit the pitch, it is with no holds barred. There is no such thing as “touch” here; it’s full contact all the time. This tradition is telling of rugby’s history in Madagascar; the game is especially popular in the Tanàna Ambany (low villages) of Antananarivo (Tana), the location of the capital’s poorest inhabitants, as well as the highest rates of illiteracy and idleness. Although rugby in Madagascar is played by the upper class as well, French sociologist Pierre Bourdieu emphasized how especially important the sport is for the lower classes, which lack education and therefore job prospects (source: Razafison, 2010, Africa Review). In fact, many of the country’s rugby stars come from these low villages, and are then catapulted into the national spotlight. In many aspects, Ifaty’s situation is similar to the low villages of Tana, which is why it is so important to make sure the sport is able to thrive here.

Support for rugby in Southwest Madagascar is not extremely common, but that is changing. Last Saturday (June 4th) the Ifaty teams went to Tulear to participate in the first ever all-female rugby tournament on the Sapphire Coast, organized by the French NGO Terres en Melees. It is the first time Terres en Melees has come to the Southwest, after organizing similar events in northern regions of Madagascar. The goal of the event was to raise awareness for the environment and the primary education system itself. Thus, in addition to organizing the rugby, Terres en Melees conducted a week-long train 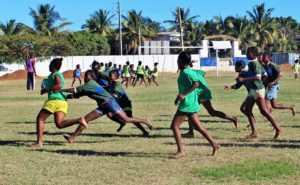 ing session of over 30 primary school teachers in alternative teaching and learning strategies. Approximately 320 girls from all over the Southwest region, including Salary Bay, Desakoa, Ifaty, Satrokala, as well as many girls from primary schools in Tulear, attended the tournament – even a local orphanage brought a team! The girls were split up into groups of 9-10 when they arrived, and all the adults present were given a team to coach throughout the day. (With this experience behind me, I can say that it is not easy to coach a team of Gasy girls with a limited comprehension of the language and no French skills.) The day itself was a blast, and all the girls got to make new friends and encounter different playing styles. In the afternoon, the women’s teams from Ifaty and Tulear played a match before the tournament finals. It was an excellent game, and both teams really left it all on the pitch. Although it was an extremely close game, the final score saw a 10-5 win for Tulear, giving the Ifaty girls all the more reason to practice hard in the coming months as Regionals approach. 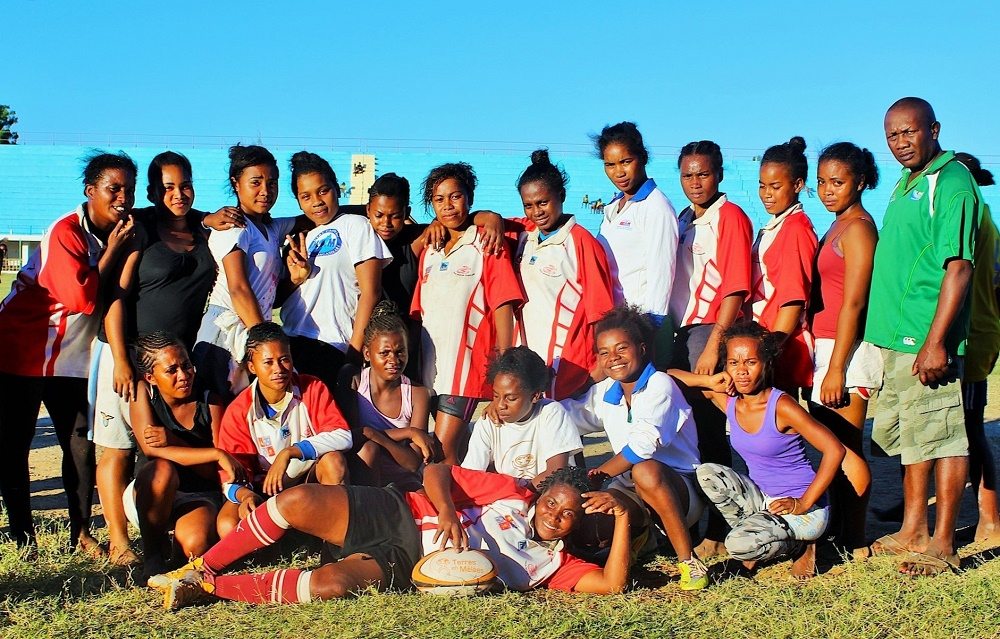 While many differences exist, the passion and pride involved in being a rugby player is the same worldwide. Which is especially impressive if you consider that here, rugby means running around in the blazing sun for 2 hours every day, without much drinking water, and having to go home with an empty stomach that might not get filled. Every day many girls come back, excited for another chance to run around and hit each other; but at the same time, many of the women are unable to do so. Coach Elias says the main issue is that the women are busy; they are taking care of their homes, doing laundry, cooking, and then leaving to play rugby and coming home starving afterwards, with not enough to eat. Anyone who has come from an intense practice of any sport knows the hungry feeling well, but it can be hard to imagine not being able to make that hunger go away. This prevents women from participating fully in the program, as they have bigger problems to worry about much of the time. We at Reef Doctor would like to give the women of Ifaty the opportunity to have a hobby, the chance to be able to exercise and play without worrying about having enough energy or food for the next day. Our goals are to provide the team with some food after practice, sports essentials like sports bras and shoes, and hopefully a team kit that the women can be proud to wear. Reef Doctor is committed to empowering women throughout the Bay of Ranobe, and the Ifaty women’s rugby team is a great place to start. Watch this space for a fundraising initiative and match updates!” 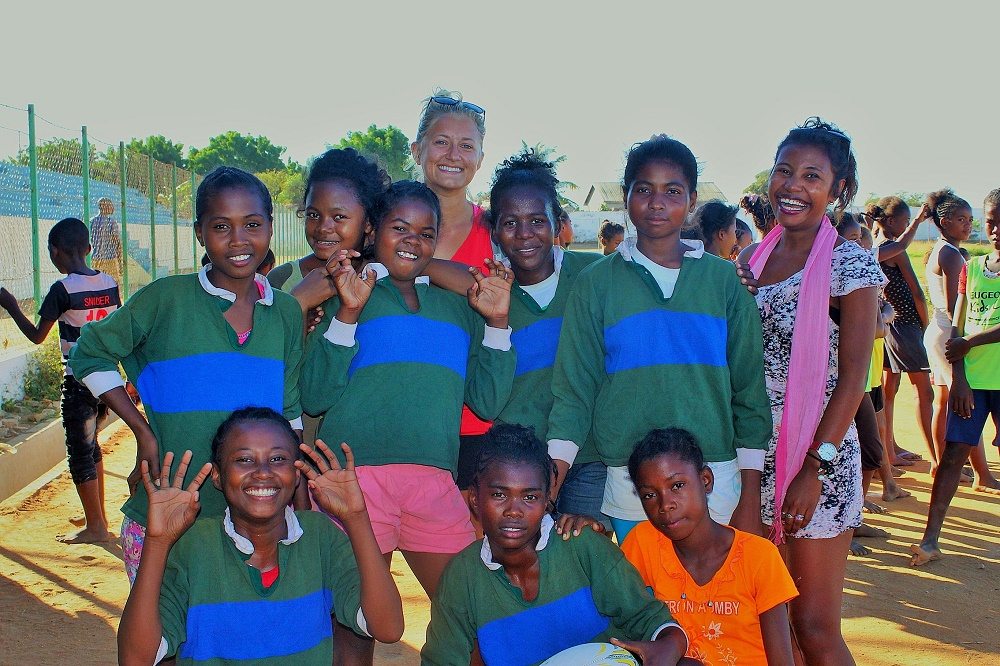