Over the weeks, you have probably become familiar with Nathaniel Maekawa, our aquaculture intern, and his way with words. Sadly, as his internship is now over and he has gone back home, this is his final instalment. No spoilers, I leave you to enjoy the reading…

“Slipping from its owner’s tiny fingers, the stuffed animal began its freefall. Held by her mother, the little girl stretched out her arms to the floor. Despite the child’s pawing efforts to save her fluffy friend, she only succeeded at swiping the air around her. Just as the stuffed animal collapsed into a slumped position on the ground, a gentle hand scooped it up and delivered it to the fumbling child. Hugging the stuffed animal tightly, she grinned in gratitude at the ReefDoctor intern that had come to her rescue. The intern returned a smile, nodded warmly to the girl’s mother, and then proceeded to catch up to our group. In the blur of just arriving, witnessing this shared moment of compassion reoriented my wandering senses and emotions. Amidst vibrant colors, distinct smells, different languages, and new people, I found myself realizing that I was in the company of those who care. This simple realization set a beautifully positive precedent for my experience at ReefDoctor. As my time here has now reached a conclusion, I think back to this simple, yet wonderful moment that happened the day that I arrived in Tulear. I think of what brought me to Madagascar, and I think of all that I have learned since arriving. 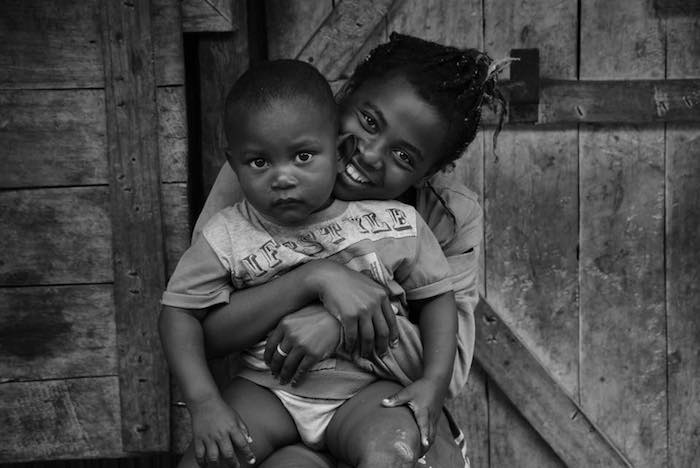 Sustainability has many definitions. It is a multitudinous aspiration that seeks to protect the planet and its many inhabitants. I was introduced to the concept of sustainability at my university, when I discovered a passion for medical anthropology. Medical anthropology is a field that examines how different sociocultural contexts can elicit different understandings about the self, and in turn, affect interpretations of disease and illness. In our increasingly interconnected world, medical anthropology has the potential to serve as a platform to tailor the benefits of western medicine, into forms that are better received by people of various communities and cultures. This focus on holistic healing creates greater opportunities for people to receive the medical care and attention that they need, by respecting the traditions and structures that they abide to. It shifts acute symptomatic treatment to a practice with the capacity to address these symptoms’ root causes. As I studied anthropological reports and inspiring global health efforts, I became acquainted with an idea. In cases where an NGO had stepped in to provide medicine or healthcare, I wondered how communities would fare if the NGO was to leave or collapse. To maintain the positive benefits of an NGO and its mission, the NGO must work so that it too is sustained. 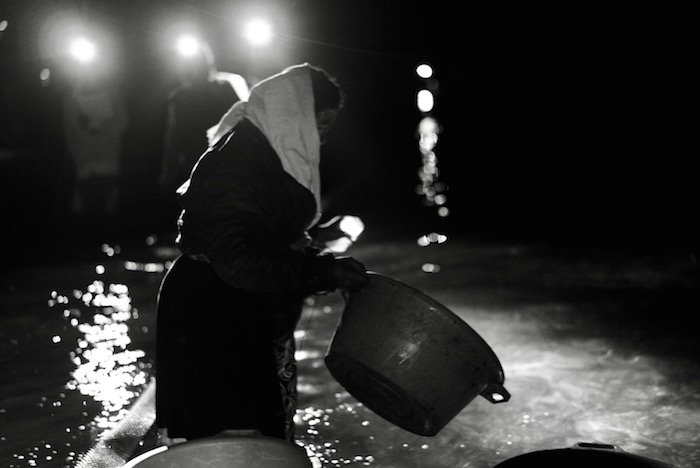 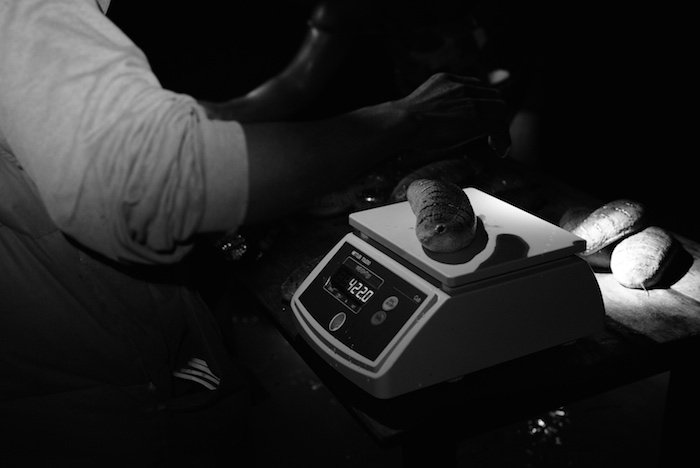 In seeking field work to expand my knowledge of sustainability, ReefDoctor’s focus on development through environmental, social, and economic initiatives captivated my interest. With sustainability being an ambiguous and interdisciplinary goal, ReefDoctor’s use of an interdisciplinary toolkit, seemed to be a sensible and promising way to approach sustainable development. As an aquaculture intern, it has been as educational as it has been fascinating to play a role in ReefDoctor’s enactment of healthier communities and environments. Through its diversification of projects, ReefDoctor’s strategy for development is multi-pronged and centered on holistic aid. This diversification has contributed to ReefDoctor’s own sustainability by attracting project funders, and by creating initiatives that are reliant on community interest and commitment. With dwindling local fish stocks and a population increase along the coast, food security is a serious issue in Southwest, Madagascar. Simply providing food may solve the symptomatic issue of hunger, but it would not solve the underlying problems of unreliable incomes, unsustainable fishing techniques, and degraded marine habitats that contribute to the lack of food availability. ReefDoctor’s aquaculture project, community involvement, data collection, and artificial reef project, complement each other. They work together to encourage the natural environment’s recovery, while also promoting social and economic prosperity. 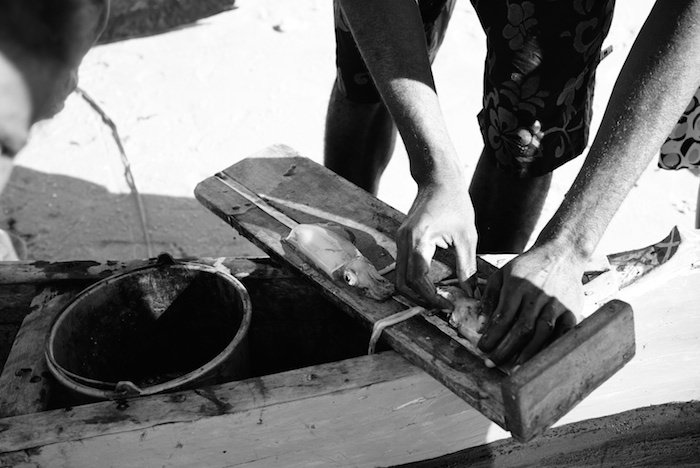 In my final week at ReefDoctor, I spent my time training the two new aquaculture interns. Delivering presentations and readings, I sought to provide them with a strong foundation for understanding the project’s background and trajectory. I took them on a fisheries survey, taught them seaweed cleaning techniques and pirogue navigation, and gave them a transition document that entails most everything I’ve learned in my two months onsite. This document, a kind of “Aquaculture Intern’s Guide to the Galaxy”, was something that I set out to create upon undergoing my own aquaculture training. With information that ranges from why we conduct certain projects, to ideal times to catch a taxi-brousse, the document intends to serve as a guide and reference for the two new interns, and any future aquaculture contributors. It is my hope that this document adds to the sustainability of ReefDoctor’s infrastructure, as it enables project inheritors to continue the initiatives with a clear and informed direction. While training the two new arrivals, I was inspired and reassured by the enthusiasm that they displayed for the project. This excitement and positivity propelled their ability to learn quickly and assimilate into their new roles. I have no doubt that I’m leaving aquaculture behind in great hands. 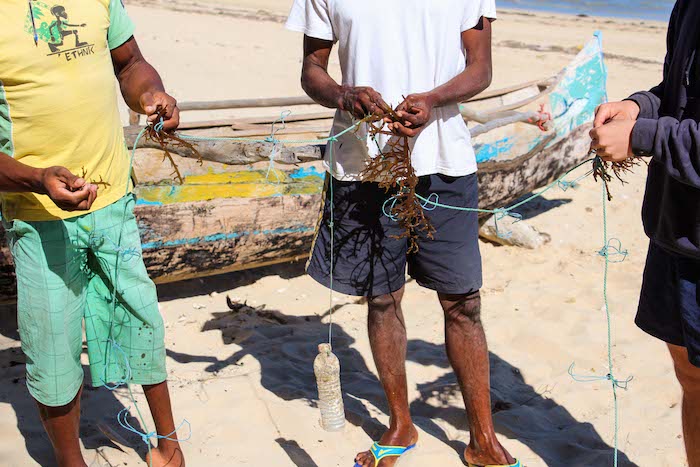 It’s hard for me to believe that my time with ReefDoctor has come to a close. The end of my internship and departure from Madagascar has been particularly poignant for me, as it signifies the end of a six and a half month academic, professional, and personal journey abroad. From trekking through breathtaking mountains in New Zealand, to de-stressing some ReefDoctor seaweed, I am in awe of the experiences that I’ve been fortunate to have, and of all the wonderful people that I’ve had the pleasure to meet. Thank you so much to ReefDoctor for helping to publish my ideas and stories, and thank you to those of you that have followed me on these spectacular adventures. On my last day at camp, I went whale watching on the exterior. As the sun shone brilliantly on the bay, and gentle swells rocked our coasting boat, humpback whales and their calves surfaced around us. Their backs arched out of the water as they glided through the blue. In the distance, two male humpbacks launched themselves out of the water to breach. It is truly a beautiful world that we live in. I am so humbled to have had the opportunity to be here at ReefDoctor and contribute to a mission that I genuinely believe in. Thank you again for tuning in, and wherever you may be, cheers to the adventures of tomorrow.”

Improving Coral Cultivation in the Bay of Ranobe
Scroll to top