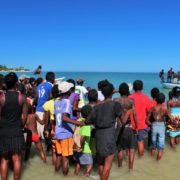 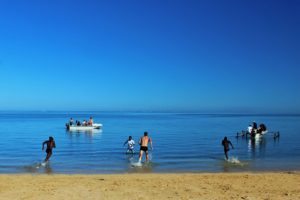 The stretch of beach in front of the ReefDoctor camp was bustling with activity as the 2nd Annual MPA (Marine Protected Area) Relay Race got underway on Friday, April 15. Teams from Mangily, Ifaty, and ReefDoctor competed in a 5-kilometer swimming race to Rose Garden, the first official marine protected area in the Bay of Ranobe. The ReefDoctor team was comprised of our Dive Officer Mikael Popov, Aquaculture Project Manager Cale Golding, Divemaster Intern Katie Riley, and volunteers Aletta Leitch, Taylah Savins, and Connor Valentine. Rescue divers Mattieu de Villiers, Izzy Sweeting, and Ivana Rubino were also on hand to ensure the swimmers’ safety in the water. The Mangily team was comprised of Francisco, Decko, Pele, Dauphin, Christophe, Delphin, and Marco, while the participants from Ifaty were Clemant, Baroky, Bruly, Odon, Tsinihy, Dona, and Koda. The race started just before 9 AM, with a large crowd of villagers and children from Ifaty already assembled in front of the ReefDoctor camp to cheer the swimmers on.

The race was extremely close, but the Mangily team pulled ahead early 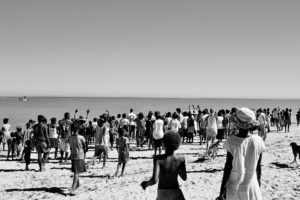 and maintained their lead throughout, finishing with a time of 1 hour 4 minutes. The Ifaty and ReefDoctor teams remained locked in a dead heat during the race, with the Ifaty team maintaining a constant 50 meter lead until the very end, when ReefDoctor sped up to close the gap to about 15 meters. As the final swimmers raced up the beach to touch the door of the school, the Ifaty team managed to pull ahead by several seconds, although both teams finished with a time of 1 hour 12 minutes. This was a noted improvement for the ReefDoctor team, which finished about a half hour after the Ifaty team during the first year! 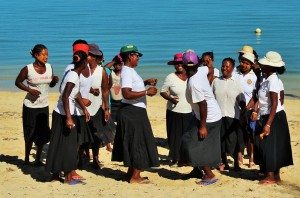 In typical Madagascar fashion (where nothing goes according to plan) the race itself was eventful, with one swimmer on both the Ifaty and ReefDoctor team becoming sick, creating an even closer race between the boats with only 5 swimmers apiece. The MPA is also a snorkeling destination for tourists and Friday was no exception, as swimmers narrowly dodged three pirogues full of vazahas (foreigners) sailing through the race path. Meanwhile, spectators on the beach played volleyball, Tug-of-War, and ate sambosa while the teams were racing. Shortly after the start of the race, the women’s association from Ifaty joined the festivities and got everyone up and dancing to the music. Jivan, our community aquaculture technician, kept the crowd informed on the teams’ progression as the rescue divers radioed back updates from the boats. The bubbly atmosphere on the beach was infectious as the swimmers arrived, with throngs of children cheering them up the beach.

After the race ended, the winning goat was presented to the Mangily team as they were congratulated on becoming 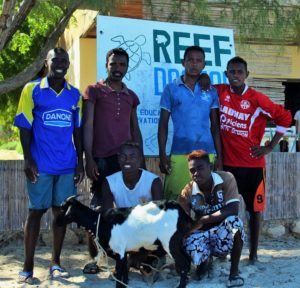 the new reigning champions of the relay race. The crowd was then treated to a presentation by our own ReefDoctor Juniors, during which the children dressed in traditional lambas (sarongs) and performed several original songs about marine conservation and protecting the ocean that were written by community education officer Rinah Badi. The festivities continued throughout the day, with a volleyball tournament between ReefDoctor and Ifaty teams taking place later that afternoon. After Ifaty narrowly won the goat over the ReefDoctor team, they ran through the streets of Ifaty (goat on hand) while their neighbors cheered them on. The Mangily team was given a warm reception upon returning home as well, as locals lined the street to congratulate them on their win. 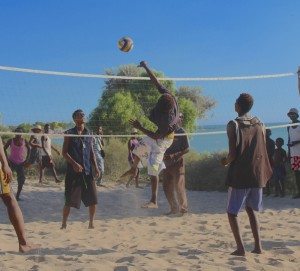 The beach party, close win, and the addition of a new team from Mangily all work to ensure that next year’s relay will be even bigger and better than this one. As you may know, the MPA relay race was initiated last year to raise funds for the construction of a new on-site schoolhouse after it suffered heavy damage from cyclone activity. This year, we set our sights even higher, aiming to build Ifaty’s first public library. By the time the event was held, we had already raised an incredible £1,016 on the fundraising page, thanks to 20 individual donors as well as a very generous anonymous donation of £500! This amount totally exceeded expectations and will make the construction of a proper library, which will provide innumerable benefits to the local population. Updates on this project will appear here as they materialize, so watch this space! In addition, the fundraiser will be running for another 3 weeks, so if you would still like to contribute please visit http://fnd.us/716rX4! Every donation big or small is gratefully appreciated by ReefDoctor and the community of Ifaty. Thank you to everyone who made this success possible!! 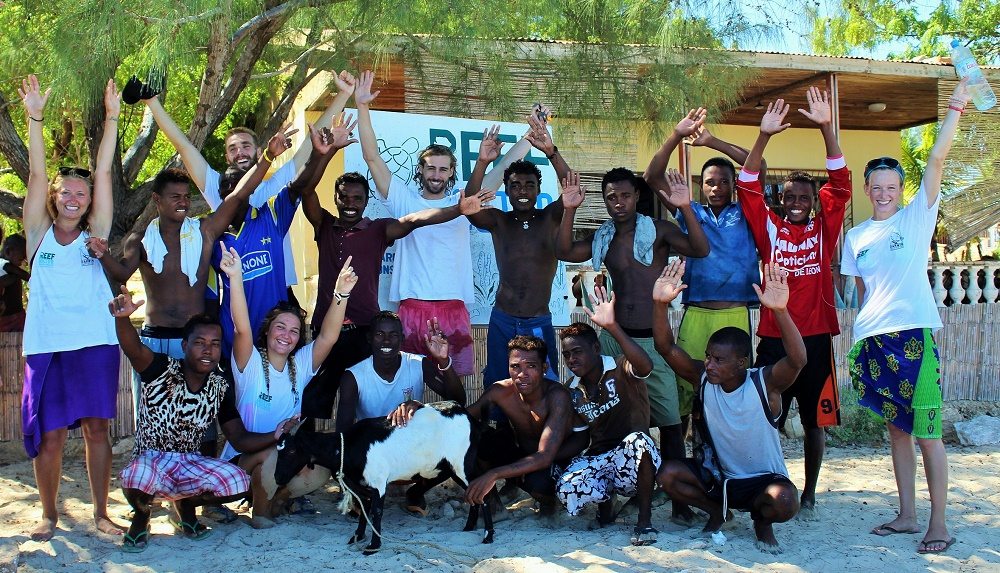 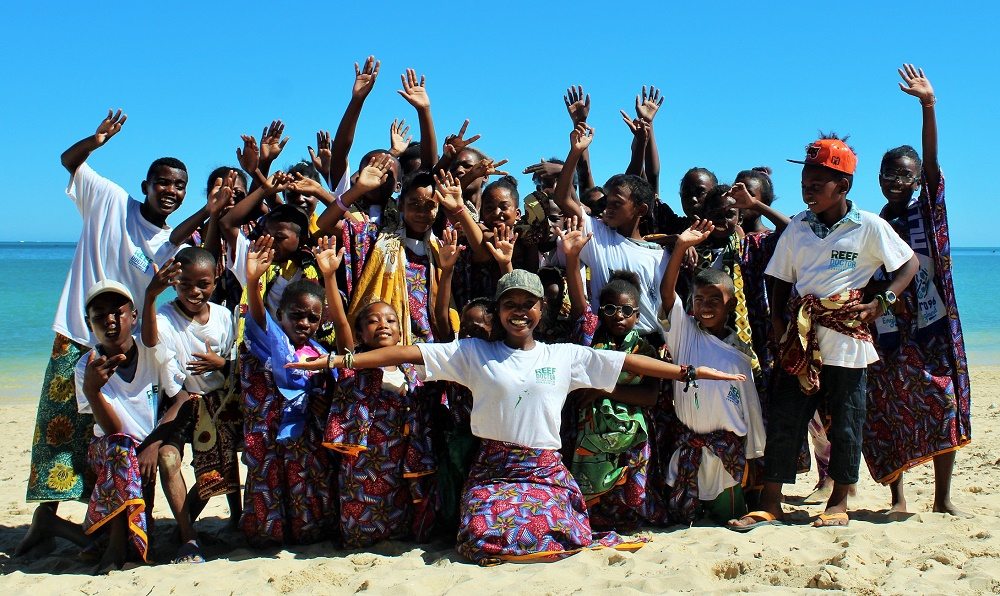 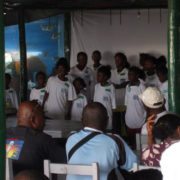 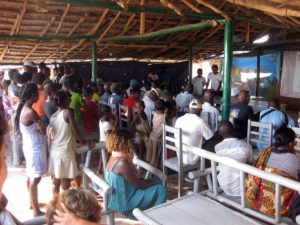 On 17th August, the Marine Protected Areas (MPA) committee for Rose Garden and Ankaranjelita hosted a special event to present the great achievements of these successful marine parks in the touristic centre of Mangily. The MPA committee members ReefDoctor, FI.MI.HA.RA; the fisheries association for the Bay of Ranobe and local stakeholders (dive-shops and hoteliers) delivered an entertaining and informative afternoon.

Together, the committee manages two MPAs; Massif de Rose (Rose Garden) and Ankaranjelita. Both sites are coral reef systems situated within the Bay of Ranobe, where fishing is forbidden and tourist access is controlled in an effort to promote and aid their natural recovery. The MPAs also provide the local tourist industry with unique sites where shallow-water snorkelling and diving are easily accessible by boat or Pirogue (a type of out-rigger canoe). Tickets for entry can be purchased locally, the proceeds from which are directly invested into ongoing conservation and protection efforts. 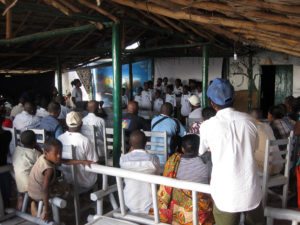 The establishment of MPAs has become crucially important for the marine environment worldwide, particularly in areas of gross overfishing and exploitation. MPAs provide refuge to a wealth of otherwise declining species, allowing them to develop and thrive within a relatively safe environment. Evidence suggests that the proper management of MPAs can also help to increase and sustain fisheries stock in adjacent, unprotected areas.

Environment and fisheries government ministers, fishermen from the north of Madagascar on an exchange program funded by WWF, local fisherman, hoteliers and other businesses attended the MPA day, which aimed to promote the support of MPAs and to educate attendees on the continued work undertaken by the MPA committee within these areas. Presentations were given both in Malagasy and French to a well-attended audience. A special appearance was also made by the Junior ReefDoctors, who made their own presentation followed by the performance of a song written specifically for this event.