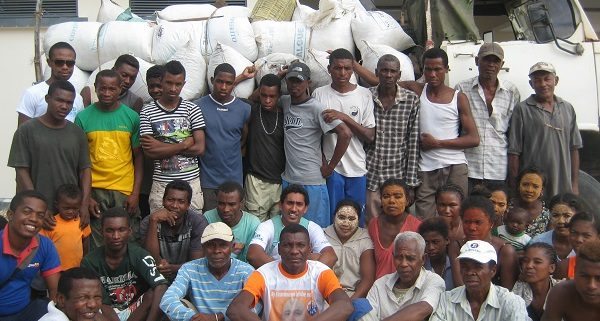 It was a busy month for seaweed farmers across the Bay of Ranobe in February, with sales taking place in four villages.

On Monday 15th, the village of Ambolamailaky celebrated their first seaweed sale since the Darwin Initiative-funded project was implemented there in October 2015. Twenty-two farming households sold a total of 858 kg of dried seaweed, an outstanding result for their first harvest.

Two days later, the village of Amboaboaky also experienced their first seaweed sale, with eight farming families presenting a combined yield of 338 kg of dried seaweed.  Although one of the smaller villages in the Bay of Ranobe, the farmers of Amboaboaky are proving themselves to be adept seaweed farmers, and they are excited about their future prospects as seaweed farmers. 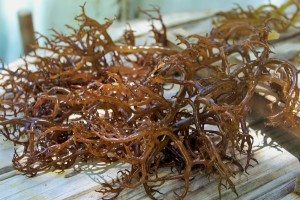 As the collection truck moved south along the bay, the village of Mangily was next in line to sell its seaweed.  These farmers have had four sales to date, however this was their first for 2016.  A total of 677 kg of seaweed were harvested, dried, and sold by 16 farmers.

Finally, came the village of Ifaty, where 14 households sold 672 kg of seaweed in the last sale of the month.  All the sales for February produced a combined harvest of 2545 kg of dried seaweed.

The farmers involved in the Darwin Initiative-funded alternative livelihoods project have been working consistently to understand how their seaweed grows, and to develop a deeper understanding of exactly how to care for their seaweed to attain the best results.  Their success so far is attributable not only to their hard work, but also their willingness to try something different.  While most of the farmers engaged in this project had heard of seaweed farming, most of them had never done it before.  Certainly, none of them had ever done it like this before. 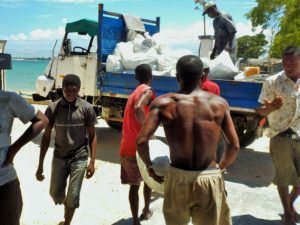 While there are numerous methods of growing seaweed, in Madagascar the Off-Bottom Method, where seaweed is grown on ropes just off the seabed, is the most common.  Reef Doctor experimented with numerous growing techniques, and introduced the Long-Line Method to the farmers of the Bay of Ranobe.  This system uses floating ropes placed in deeper water, and consequently has numerous benefits.  Improved access to sunlight and nutrients allows for faster growth, alongside reduced competition with seagrass.  Farmers have access to their farms at any time, and can work from their boats, avoiding exposure to the harsh elements.  Additionally, the location of the farms is more flexible, avoiding any potential conflicts over access to the marine environment.  This technique has proven to be so favourable that the Long-Line Method is spreading to other seaweed producing regions throughout the SouthWest Madagascar, as word travels. 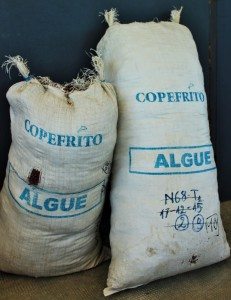 Given the most recent harvest results, it is clear that the seaweed farmers in the Bay of Ranobe are taking to their new livelihoods.  Farmers are excited to be at the forefront of seaweed farming in Madagascar, gladly showing off their farms and the results of their dedication.  At Reef Doctor, we are excited to watch the seaweed farms grow, production increase, and communities develop.  It is a long road out of poverty, but for those fishermen now farming seaweed, the first steps have already been taken.

Working Towards Gender Equality and Poverty Alleviation in the Bay of Ranob...