Back in August we posted some pictures of the blessing of the rocks being used in a new reef restoration project. It has been months in the planning but we are very excited to confirm that everything is now ready for construction. On Friday 21st of October the site of the first artificial reef in the Bay of Ranobe will be blessed during a huge day of events in Ifaty village and on the beach. The community event will even be attended by the Minister of Fisheries and the Mayor of the Belalanda region. 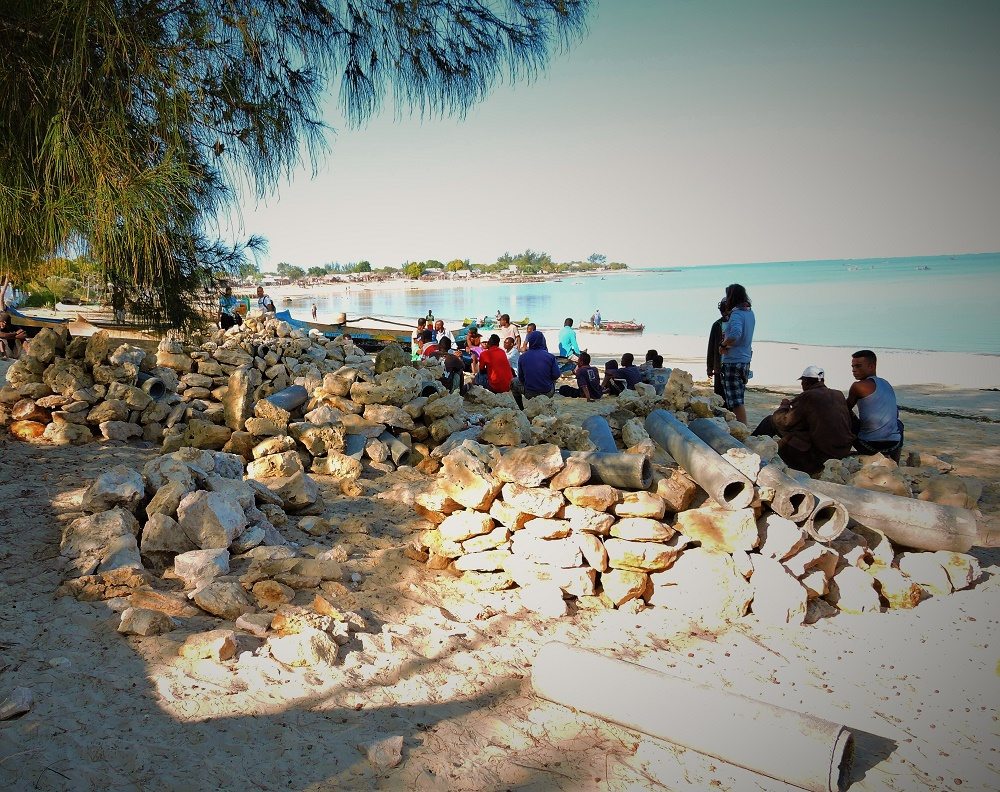 So first a bit of background on the project. The bay’s 32 km reef forms one of the largest coral reef systems in the world. However, the majority of coral reef habitats within the bay have been heavily degraded over the last decade due to bleaching, sedimentation, and overfishing. The majority of reefs have now been overgrown with algae and are mainly composed of dead coral rubble. This ecological degradation is in turn compromising marine resource availability for local fishermen. It is therefore imperative to implement a sustainable and widespread reef restoration programme in order to prevent total collapse of this valuable ecosystem and to reverse declining fishery catches for local subsistence communities.

Our earlier attempts to protect coral reefs in the bay comprised the establishment of two marine reserves (2007–2008). While the prohibition of fishing in the reserves has resulted in an increase in fish populations and the maintenance of coral cover at these sites, the establishment of additional marine reserves has not been feasible. This is because the continued degradation of reef sites in the bay has limited the availability of productive fishing reefs for local fishermen. Therefore, in order to address the social and economic needs of the local fishing communities, alternative fishing grounds must first be provided before the few remaining viable reefs can be protected from fishing.

Our new artificial reef project plans to install simple, relatively low-cost and replicable artificial reef structures on degraded reef sites to increase fish and invertebrate populations in order to improve fisheries productivity, reverse declining catches and redirect fishing pressure off over-exploited fragile coral reefs in the lagoon interior. We also intend to speed up the regeneration of corals reefs at these sites by transplanting coral fragments from our nurseries on to the artificial structures as part of our coral gardening project.

Back in March, we sourced low-cost limestone boulders from a local quarry in Ifaty village (providing direct financial benefits to Ifaty village quarry workers) to trial a simple artificial reef method. Limestone is ideal for artificial reef work as it mimic natural reef systems and is the perfect material to encourage reef organism settlement. Arrangement of these boulders into artificial reef bommies (a reef outcrop) will create structurally complex habitats in areas devoid of coral reefs to encourage colonisation of algal and invertebrates (including coral), which will in turn attract fish. In the long-term, we aim to install a network of these bommies across the bay in order to restore coral reef habitat and create alternative fishing sites. 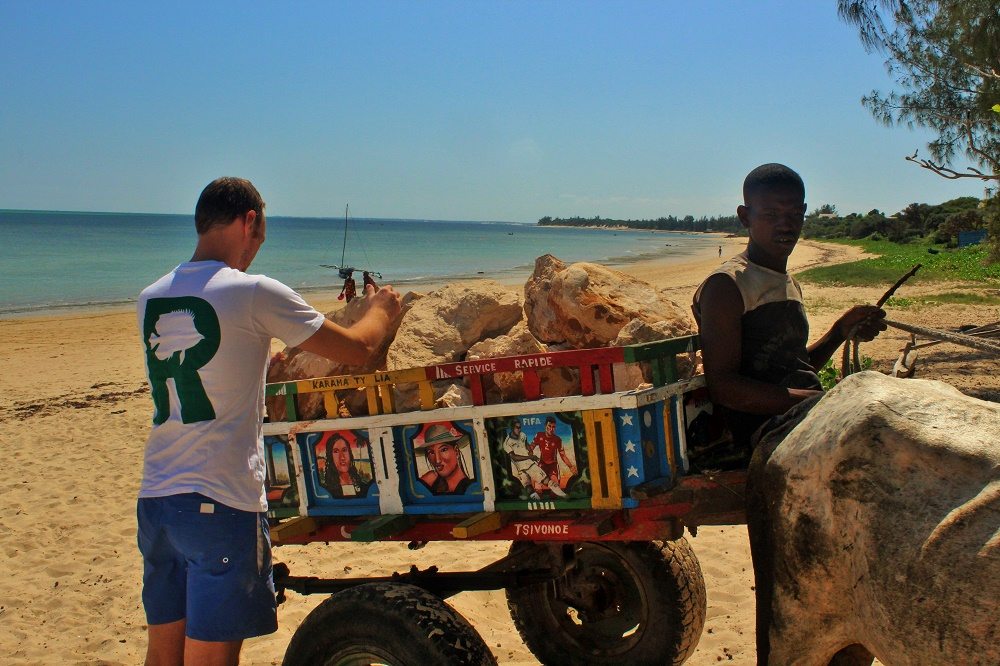 We purposefully choose a simple structural design and low cost local materials for these artificial reefs so that local communities can maintain and replicate these structures in the future without external assistance or intervention. This project is being executed as a joint effort with Directeur Régional des Ressources Halieutiques et de la Pêche, Région Atsimo Andrefana – DRRHP (Ministry of Marine Resources and Fisheries), IOT, COPEFRITO, FRDA, Institut Halieutique et des Sciences Marines (University of Toliara), and importantly FI.MI.HA.RA (regional fishermen’s association), representing all 13 villages in the bay (> 20,000 people), in order to promote community ownership and project sustainability. 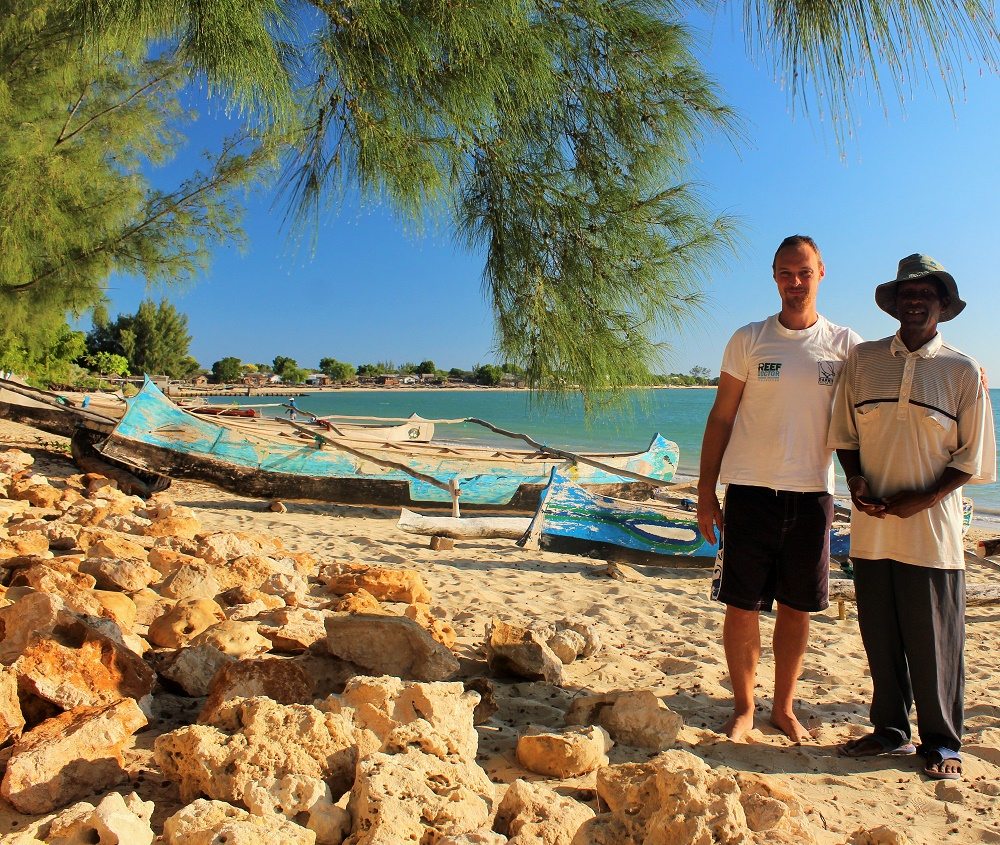 For the initial pilot scheme, we decided to start our efforts near the Rose Garden marine reserve, where years of protection have increased fish populations over a relatively limited reef area. Therefore, by placing a network of interconnecting artificial reef bommies in a region close to the reserve, we hope this will encourage a species spillover effect, and provide a corridor of new substrate to be inhabited (connecting other intermittent bommies and seagrass beds in the vicinity), regenerating marine life in areas of degraded reef. This in turn will provide alternative fishing sites so that the fishermen can directly benefit from Rose Garden’s high productivity, whilst allowing the marine reserve to continue to flourish in the absence of fishing pressure. In addition, we hope that this artificial reef site will be further protected by FI.MI.HA.RA with the implementation of open/closed fishing season rotations under a sustainable fisheries management plan.

The science team conducted survey dives and manta tows at various areas in the search for a suitable site, and in early August a site was agreed and mapping survey dives took place to map the area. They also carried out a considerable amount of artificial reef literature research. Armed with this knowledge and approximately 21 tons of limestone and five concrete tubes, design began on the bommies with prototypes being built on the beach and various different designs tested. The bommies had to be secure so that they wouldn’t collapse in strong currents but they also had to provide lots of interesting hiding places for marine life. The concrete tubes are going to provide habitats for octopuses and lobster. The science team have also been busy researching and developing monitoring methods to evaluate the impacts of the artificial reef on marine life, fisheries, and reef regeneration over time. 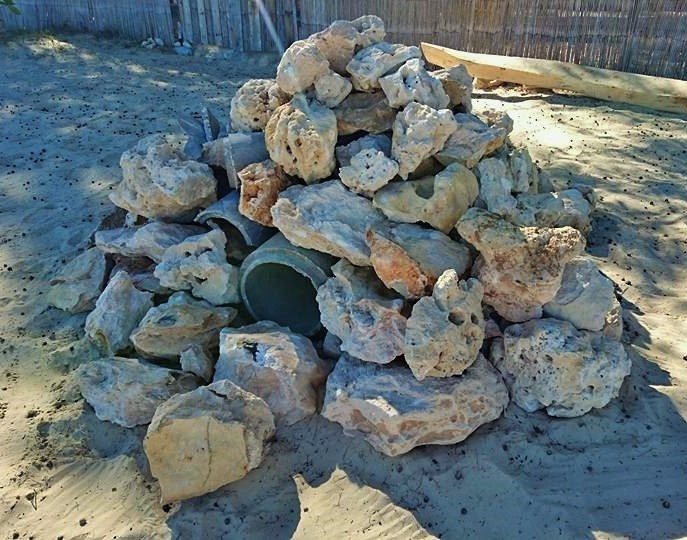 Once the team had a good idea of where and what needed to be constructed, it was time to present the idea to the local community to obtain agreement and permission to bring the artificial reef project to life, since this is a community project that belongs to everyone in the area.

Monsieur Bruno Keza Souvenir, president of FI.MI.HA.RA, visited the site in late August. The matter was discussed with the members of FI.MI.HA.RA and the idea approved. The team was now ready to present the idea to people of Ifaty and this phase began with a meeting with the Olobe (village elders) of Ifaty at the end of August. The Olobe approved of the plan and we were honoured to be visited by the Olobe on 24th August when a traditional blessing with rum was carried out on the rocks on the beach. 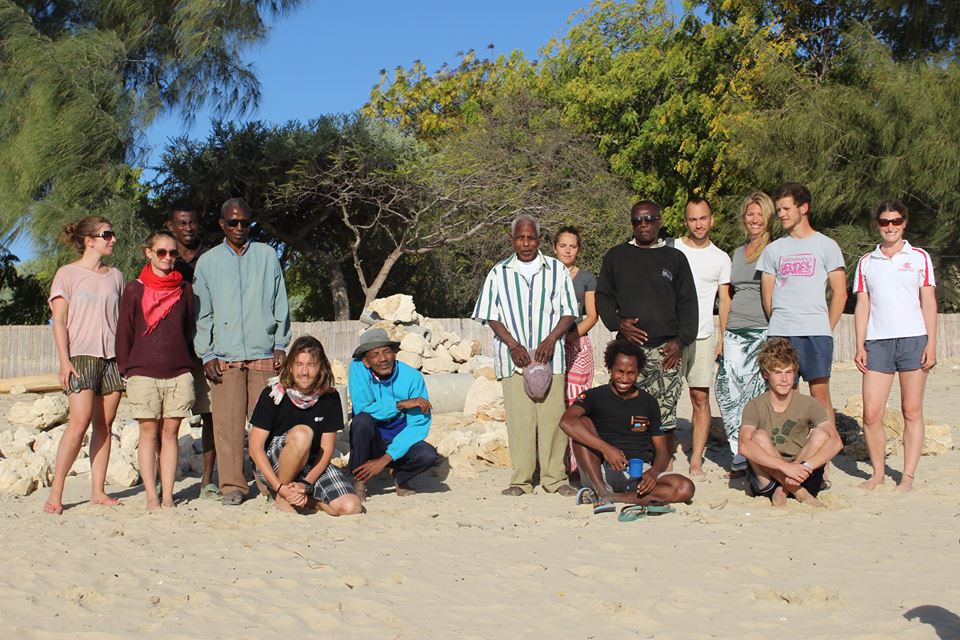 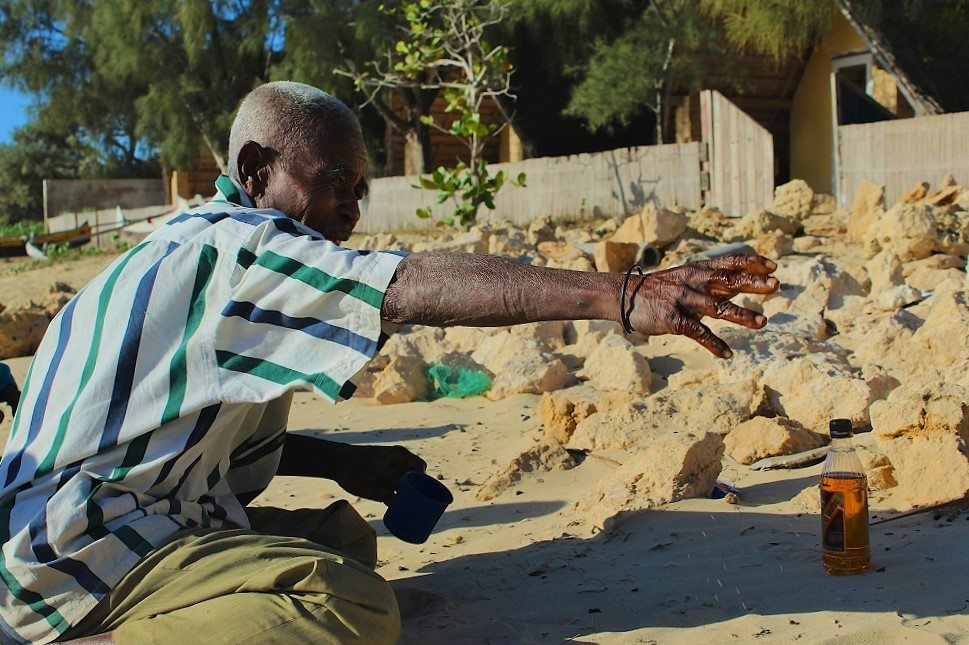 Following the meeting with the Olobe a presentation was made in the village in mid September to discuss the idea with the community. The team discussed the difficulties faced by fishers in the bay and those present agreed but felt that there was nothing that could be done. This provided the perfect opportunity to introduce the Artificial Reef Project, as the team was able to confirm that there was definitely something we could try and they had been planning a solution for some time that would be implemented if the community wanted to proceed. Everyone agreed and the team awaited word of the start date from the residents of the village. 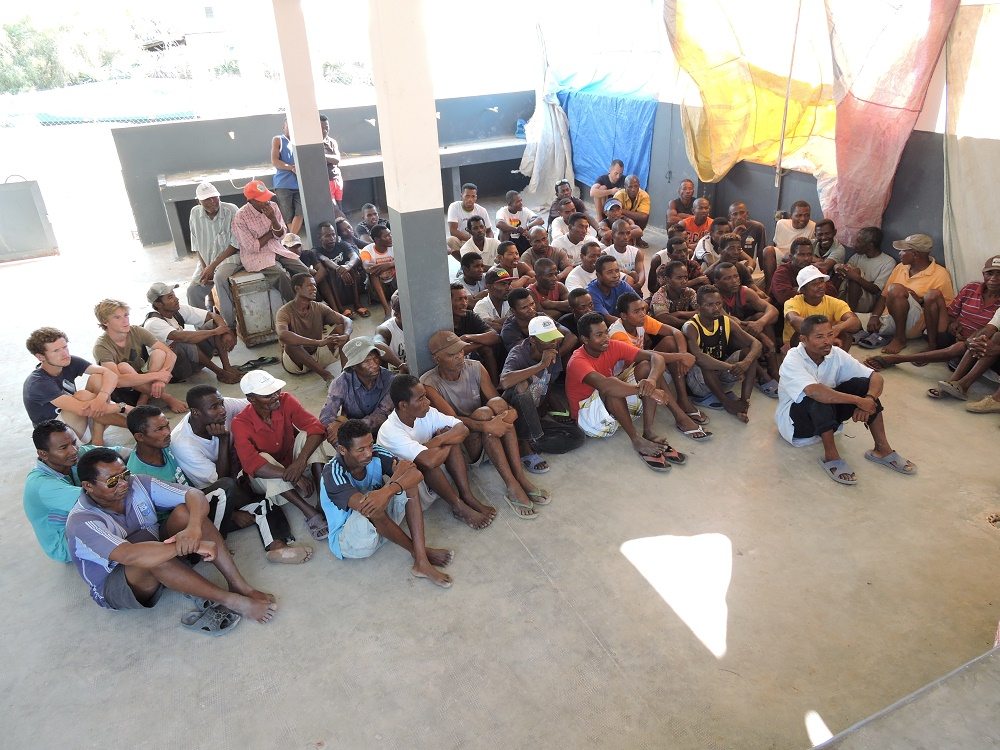 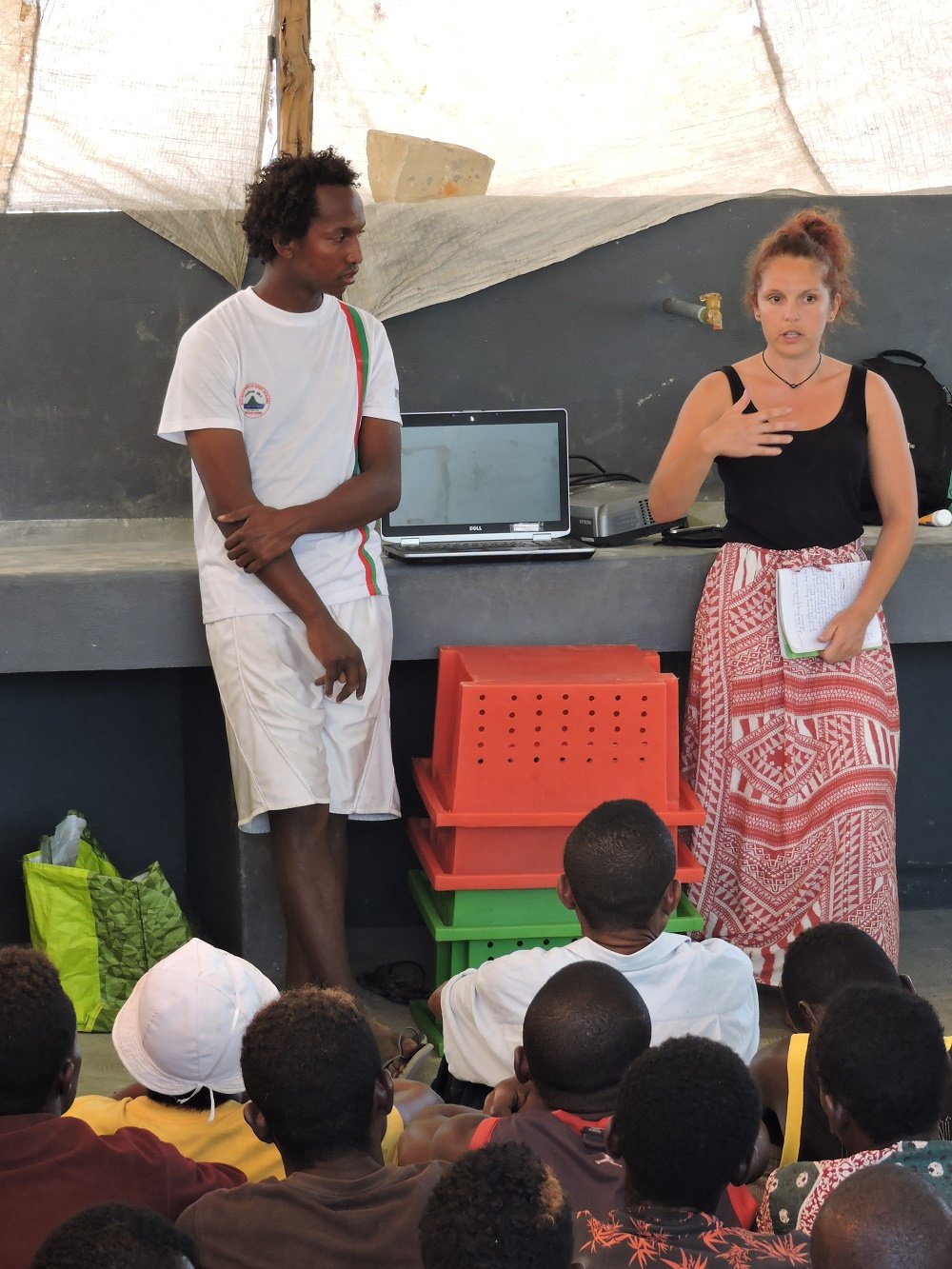 Preparation continued throughout the months of August and September. The protocol for survey methodology was agreed in mid August and the bommie position markers were put in the water. By the end of September building on land was finished and it was agreed that the final design would consist of two large bommies with three small bommies connecting them. At the end of September the first trial construction took place underwater. As the rocks had to be brought back to the surface, just 14 rocks were used. The dive was a success as the construction methodology was decided upon. On the 5th of October the markers were placed for permanent surveys and the first mimic survey took place the following day. Meanwhile the community agreed upon the 21st of October as the official start date for construction. 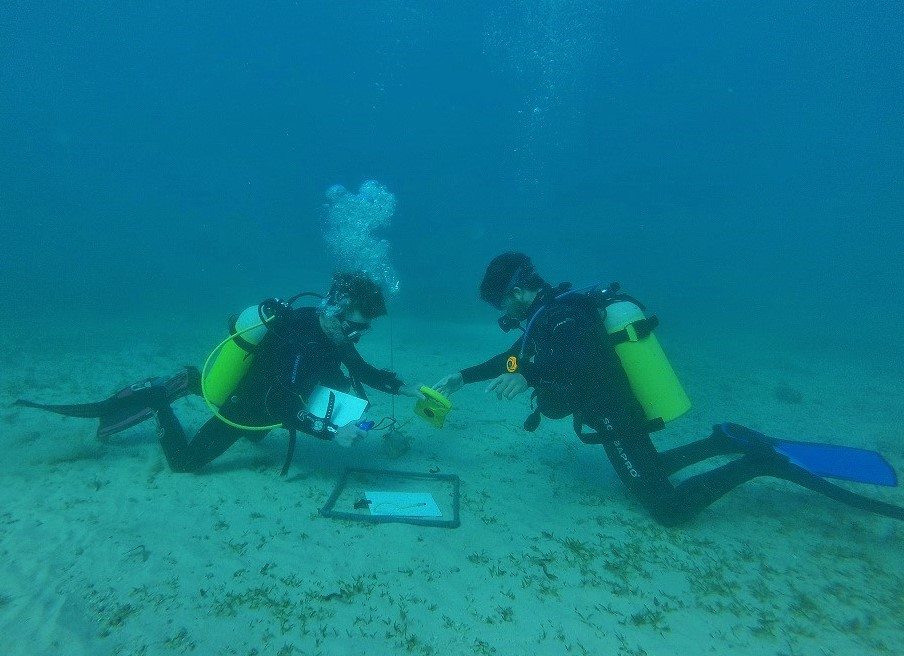 With just two weeks left to go before the big event everyone on camp and in the village is preparing. A day of traditional Vezo festivities is planned, with events taking place throughout the village including traditional Vezo dancing, songs from the Juniors, official speeches and traditional sporting events. The main attraction, however, will be the blessing of the site where the limestone rocks will hopefully become a vibrant reef providing an improved fishing ground for the area. The site has been named Vato Mahavelo meaning the rock that gives life and we are all optimistic that this will be the case.

If you would like to be part of the construction and maintenance of Vato Mahavelo get yourself signed up as a ReefDoctor volunteer and come and join the team hard at work. Alternatively, another great way to help is by donating to the project to help fund monitoring and bommie implementation expansion across the bay; fundraising details will be provided later this week. Thank You!!