Today is World Environment Day, run by the United Nations Environment Programme (UNEP). This year the theme is ‘Go wild for life: zero tolerance for the illegal wildlife trade’. During the early 1990s $160 billion was spent annually on the wildlife trade; it is considered the second biggest threat to species survival (source: WWF). We decided to support UNEP’s theme this year by highlighting the issues involved with the sale and exportation of marine life, in particular the coral reef curio trade. An estimated 14–30 million fish, 1.5 million live stony corals, 4 million pounds of coral skeleton, 65–110 thousand pounds of red and black coral, and 9–10 million of other invertebrates are removed each year from marine ecosystems across the world to supply the aquarium, curio/home décor, and coral jewelry industries (source: Defenders of Wildlife, 2012). The marine curio trade is a global industry involving the sale of shells and dried marine animals such as sponges, seahorses, corals, and sea urchins. While a large portion of marine curios are sold legally, illegal trade still continues worldwide.

Every year tourists take home mementos from their favourite holiday destinations. These mementos are often bought from vendors on the beach, in markets and in resorts. These transactions are, more often than not legal and therefore it may be the case that people buying these mementos are not aware of the impact their actions have on the environment locally.  Its just one shell, right? There is no harm in that.  And if it were just one shell there would be no harm in it. But if every person who goes on holiday or buys shells from vendors buys just one shell that quickly adds up over the course of a year and the affects can be significant.

But if you don’t buy or take endangered species there is no problem, right? If you only buy shells and jewelry you’re not affecting any vulnerable species, right? Unfortunately, no, that is not the case. The marine aquarium and curio trade represents a prominent threat to coral reefs. In many cases, the local and regional intensity of marine species collection appears to be occurring at unsustainable levels and some surveys have indicated that almost all reefs have been affected by over-collection.

So, exactly what damage does the curio trade in specific do to coral reefs and local marine species populations? 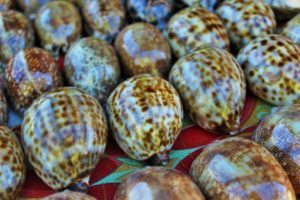 Firstly the empty shell that tourists buy once had an animal living in it. In the Toliara region of SW Madagascar many of the shells you see on sale are cowrie shells. They are very shiny and smooth, and look as though they have been polished.  And they have, by the snail that lived inside it. Cowries cover their shells with the lobes of their mantle and the action of covering and uncovering the shell leaves the surface polished. When the shell is collected the animal dies. Cowries have been valued for centuries as ornaments because of their smooth surface and attractive colouring.  Many of the bracelets and necklaces you see for sale on beaches contain cowrie shells. But they are not the only creatures collected for the curio trade. Dried puffer fish, seahorses and sea urchins together with many different species of shells including scorpion, triton and murex snails can also be bought regardless of how vulnerable that particular species is. The curio trade does not discriminate between vulnerable and abundant species.

Second, many of the shells and all coral fragments collected for the curio trade come from coral reefs. These reefs are often damaged by people collecting for the curio trade by breaking coral to remove it, stepping on fragile coral and other organisms and sometimes blasting parts of the coral with dynamite to get at shells and invertebrates. Third, shell ma 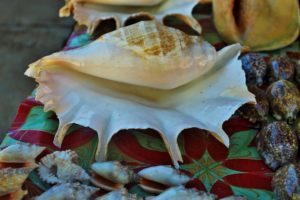 terials left behind by dead organisms perform many important ecosystem services such as beach stabilisation, provision of colonization surfaces for algae and encrusting organisms, and habitat creation (material for bird nests, home for hermit crabs etc.) Furthermore, shell material is continuously dissolved in most coastal areas resulting in elemental recycling back into the global marine carbon reservoir. Therefore, the removal of shells will lead to changes in local calcium carbon carbonate cycles, with large-scale biogeochemical consequences.

Continued support of the curio trade encourages over exploitation, which puts pressure on the resource and on the health of reefs where these creatures are found. This in turn can disadvantage the local community. What do they do when all the shells are gone or the reef is so damaged it cannot sustain the local fish population that feed on coral and algae?

Shells are really pretty, that’s why people like to wear them and decorate things with them, but they are so much prettier when you see them in their natural surroundings on a beautiful colourful reef full of nooks and crannies to look into. Instead of buying shells why not use the money to pay a local boat owner or dive shop to take you to a reef to snorkel or dive to see how beautiful everything looks in the place it should be? Take a picture and leave the shell and everything else there for the next visitors to see. 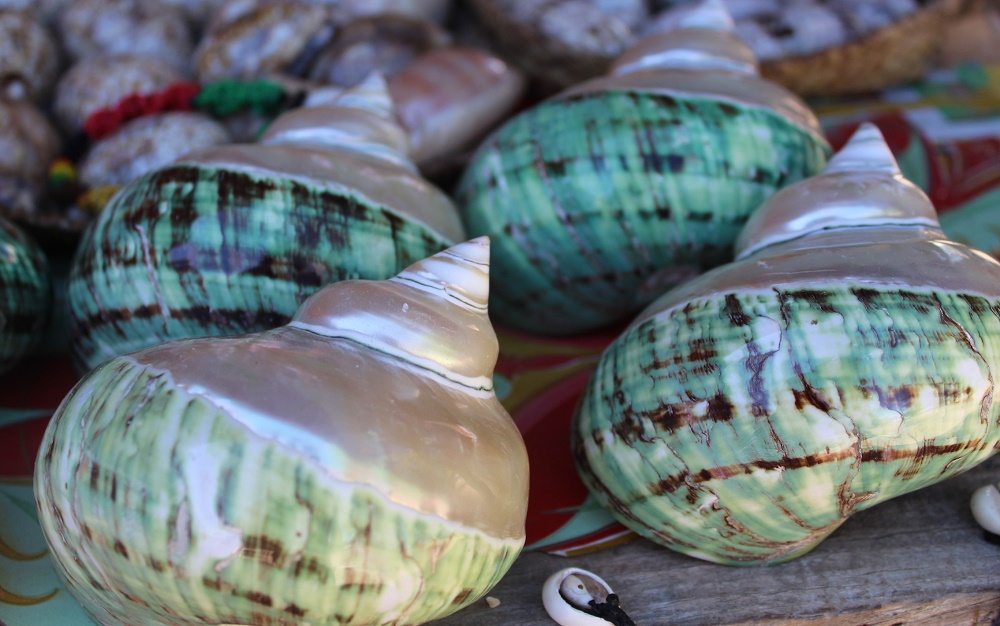 Poverty and Alternative Livelihoods in the Bay of Ranobe